Earth will be put in place between the moon and sun, blocking the light of the sun to reach the moon. This will result in a lunar eclipse. One will be observed soon across North America and other continents, according to Space.

Blood moon, also known as a total lunar eclipse, will be the first to appear in our skies on 26 May. It will be one of the most anticipated astronomical events of 2021. The eclipse won't be a simple one, though. The blood moon will be an all-in-one set of a full moon, a 'supermoon,' May's full flower moon, and a total lunar eclipse combined.

When is Blood Moon? 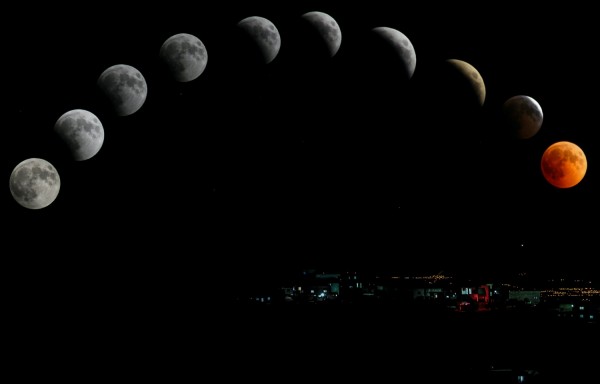 On May 26, many will witness a hybrid moon phenomenon or 'blood supermoon.' This kind of eclipse will be seen differently in various regions. The schedule of the blood supermoon mixes different types of a lunar eclipse, according to Forbes.

The date suggests that the blood supermoon will be visible all over the world. However, only the Pacific Rim will catch an exclusive view of the totality of the eclipse. This is due to the moon's orbit, which is a bit elliptical.

Because of this, some parts of Earth may see it near, while some, tiny and far. The people that will have an opportunity to see it near would not be disappointed, as it will be one of the best and brightest lunar eclipses of 2021. This is because it will revolve closest to Earth, which makes it brightly visible even before entering the 100% eclipse.

According to Time and Date, the blood moon will appear between 8:47 AM UTC until 1:49 PM UTC.

ALSO READ: After Returning from Space, What Made Pétrus 2000 Very Expensive

Observe the Eclipse on 2021

The United States has different schedules for eclipses. In 2021, we will have plenty of dates for the phenomenon. Pick the best date for you to enjoy the Solar and Lunar eclipse. Whether for observation or hobby, the list will assist you to spot and observe the rare occurrence in the right place and time of the year.

On June 10, the first solar eclipse will be observed in almost all continents, but the same as the blood moon, it will not be visible to India. Visibility of the annular solar eclipse starts at 8:12 AM UTC until 1:11 UTC.

November 19 will be the second lunar eclipse of the year. Continents like North and South America, East Asia, Australia, and the Pacific will see the partial lunar eclipse. It will be observed from 6:02 AM UTC until 12:03 PM UTC.

The moon will block the sun and casts its shadow on Earth on December 4, creating a total solar eclipse. It will be the last eclipse of 2021 and will occur from 5:29 AM UTC until 9:37 AM UTC.