A new study shows that cultivated meat - lab-grown food material that requires no slaughtered animal - will be a larger part of future diets. Furthermore, the younger generation shows a more positive reception towards them.

In the research titled "US and UK Consumer Adoption of Cultivated Meat: A Segmentation Study," recently published in the journal Foods, researchers showed patterns of greater openness to trying cultivated meat among the younger generations. Among the Gen Z adults, 87 to 89 percent responded positively, as well as 84 to 85 percent of Millennials. On the other hand, about 76 to 77 percent of Gen X and 70 to 74 percent of Boomers were "at least somewhat open" to trying these lab-grown meat.

(Photo : World Economic Forum via Wikimedia Commons)
Presentation of the world's first cultured hamburger (yet unbaked here) at a news conference in London on 5 August 2013. The cultured meat product was developed by a team of scientists from Maastricht University led by Mark Post at a cost of €250,000.

The study is led by Keri Szejda, from the School of Social and Behavioral Sciences at Arizona State University, together with Christopher J. Bryant from University of Bath's Department of Psychology and Tessa Urbanovitch from Crafton Hills College. Together, they conducted a segmentation study, surveying a representative sample of consumers in the United States (2,018 respondents) and in the United Kingdom (2,034 respondents). Researchers assessed indicators of possibly adopting the new food material among the population, both in general and in its generational segments.

Researchers noted that the majority of the consumers involved in the study were not readily familiar with what cultivated meat is. However, when the researchers presented an explainer of what the innovative product is, the respondents began to offer insights and responses. On average, respondents say that the lab-grown food could make up to 40 percent of their future meat needs, with the remaining 60 percent still coming from conventional meat taken from livestock.

Among the respondents from both the US and the UK, 40 percent were classified as "very" or "extremely likely" to try cultivated meat. Researchers tagged this group of enthusiastic respondents as the "early majority" group. Within this group, almost 98 to 99 percent said that they'd consider cultivated meat as a regular item during their shopping runs. Additionally, this early majority mostly belonged to the younger generations (Gen Z or Millennials), male, more liberal, and more educated according to the researchers. This was equivalent to an average of 77 percent of Gen X and 74 percent of Boomers, in comparison to 85 percent of Millennials and 89 percent of Gen Z. 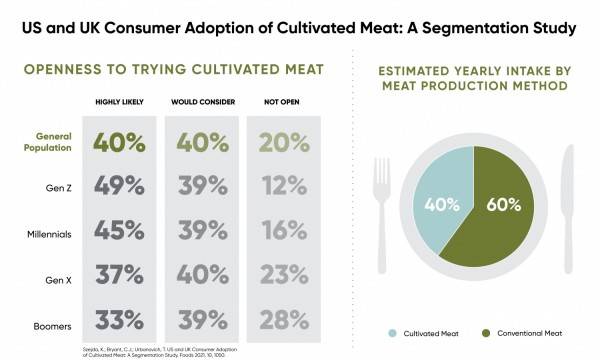 The Food of the Future

In their published study, researchers noted that "despite growing evidence of the environmental and public health threats posed by today's intensive animal production, consumers in the west remain largely attached to meat." With cultivated meat, meat is grown directly from cells, culturing them to grow into consumable quantities.

With these lab-grown foods, there is no need to slaughter animals. Furthermore, these are grown in laboratories, under carefully controlled environments, which minimizes the risks of bacterial contamination, as well as having less saturated fat. Lastly, with the development of new technologies, production of cultivated meat might be more scalable, which would allow the easier manufacture of these foods in larger quantities, driving down the price.

As for the results of the study, Co-Founder and CEO of Aleph Farms Didier Toubia notes that "In order to turn this expected acceptance into actual consumption patterns over time, it is critical to develop the right products, based on the right solutions."  He adds that for the long run, Aleph Farms - who also commissioned the study - is looking to provide a better alternative to industrial livestock farming, which corresponds to about 70 percent of the global meat production at the present.

Check out more news and information on Lab Grown Meat in Science Times.