Supermassive black holes are popular for being a devourer of light and matter. It can also spit out any material outward of its center abyss with great force, emitting glowing portions around the black hole. Experts recently identified these hot, bright plasma that could expand lightyears away across the void of the universe.

The explanation of black holes sucking up matter had been already established by physics experts. Black holes have limitless energy and a massive amount of gravity that it can even trap light and scoop it up around a void, black sphere on its center.

But among the mysteries of black holes are the things they emit. Radboud University astrophysicist Sara Issaoun said that these energy emissions that look like jet rockets are still in question.

Just until recently, the strange bright beams were uncovered and examined. Using the Event Horizon Telescope (EHT), Issaoun and her team were able to observe the latest photo from the galaxy M87, which the radio telescope gathered. Compared to their findings in 2019, the latest photo shows the same features where the supermassive black hole is crowned with glowing plasma. However, unlike the first photo, the recent image vividly shows separate spiral stripes that suggest a possible polarization on the light itself. 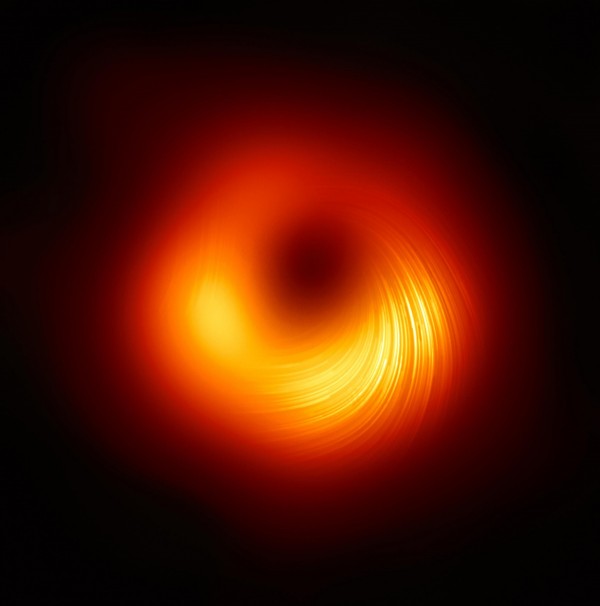 According to the 1977 study published on ADS entitled "Electromagnetic extraction of energy from Kerr black holes," these spiral light sequences were a product of a strong magnetic field. The unique detail of this specific black hole from the M87 galaxy is possibly evidence of the Blandford-Znajek process, a 40-year old jet launching theory, reports Quanta Magazine.

University of Cambridge physicists Roger Blandford and Roman Znajek suggests that the spiral movement of supermassive black holes will affect magnetic fields to a thin helix which produces a voltage that will pull and push energy in and out of the hole. The two describe the phenomena as the jet, a shred of supporting evidence for the black hole theory where nothing escapes it.

The Blandford-Znajek process was first mere speculation, but today, it is reinforced due to the recent examination of the radio telescope image. In reference to the EHT observation, Issaoun said that the polarization is causing the almost perfect spiral motion of the stripe, meaning that the magnetic field that works on the black hole is potentially in spiral form.

The size of the black hole is as large as our solar system and produces white-hot plasma that stretches 5,000 lightyears. It contains at least 500 trillion times the joules of energy humans consume and burns in a decade. Overall, Issaoun said that the black hole is tiny relative to the energy it emits.

The early 80s and 90s improved the Blandford-Znajek process. With the innovation of computing systems, the theory was able to put into simulations. However, the factors needed for research, such as the magnetic field and the rotating black hole, were only variables. But thanks to the EHT, experts were now able to analyze the plasma beam emissions, and the black hole from galaxy M87 is a great leap to study more about the matter-eating void and the ring of light around it.