Over the past decade, the farming town of Corcoran, California, has been sinking two feet every year as agriculture firms pump underground water to irrigate crops. 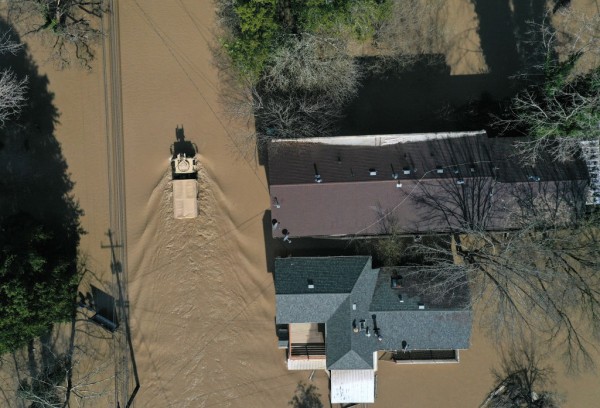 (Photo: Justin Sullivan/Getty Images,)
GUERNEVILLE, CALIFORNIA - FEBRUARY 28: An aerial view of a flooded neighborhood on February 28, 2019 in Guerneville, California. The Russian River has crested over flood stage and is now receding after floodwaters inundate the town of Guerneville. The town is currently under mandatory evacuation and roads leading into the town have been flooded over.

According to the USGS California Water Science Center, the sinking is the product of agriculture industries pumping underground water to irrigate their crops for decades.

While Corcoran has sunk about four feet in several places since 2015, the city could sink to another six to eleven feet over the next two decades.

When they can't get enough surface water from nearby rivers or canals, farmers have resorted to pumping out groundwater under the earth's surface for years.

Corcoran in San Joaquin Sinks Two Feet A Year, According to NASA

Jay Famiglietti, a former senior scientist at NASA's Jet Propulsion Laboratory, assisted in discovering the bowl and has been warning of extreme sinking in the region since 2009 based on satellite imagery.

Scientists at the NASA lab have spent years using radar and satellite technologies to map subsidence there and elsewhere in the San Joaquin Valley.

Several of the trouble spots found in the first study are now subsiding at speeds of up to 2 feet (0.6 meters) each year. Experts found two significant subsidence bowls near the towns of Chowchilla, south of Merced, and Corcoran, north of Bakersfield.

Around May 2015 and September 2016, the bowls became larger and bigger, covering hundreds of square miles. Maximum subsidence was about 2 feet (0.6 meters) in the Corcoran region and about 16 inches (41 centimeters) near Chowchilla during this time frame.

ALSO READ: 59M Hectares of Forests Have Regrown Since 2000, Soaking Up 5.9 Gigatons of Carbon Dioxide

Subsidence has also increased in the past year near Tranquility in Fresno County. The ground surface has settled up to 20 inches (51 centimeters) over a 7-mile stretch (11 kilometers). Aqueducts and flood control systems are affected by subsidence in these regions.

Some Corcorans are keen to blame agricultural companies that employ in a depressed area for contributing to the cause of a little-known geological issue that no one can see.

"It's a risk for us," said Mary Gonzales-Gomez, a lifelong Corcoran resident and chairwoman of the Kings County Board of Education told the New York Times. She said they all know the situation. However, she said there's "nothing that [they] can do, and she doesn't want to relocate.

The sinking has also changed the town's geography, becoming the "Corcoran Bowl," a 60-mile-long region of farm fields in and around Kings County.

High Country News said the bowl is a region of deep sinkage in the soil, with Corcoran at its heart.

However, the Corcoran Irrigation District had to build three lift stations to pump water through ditches due to infrastructure disruption.

The river used to flow by gravity alone. Still, the sinking caused sags in the ditches, causing the water to collect rather than flow out. Hence, the district had to spend $1.2 million over ten years on lift stations to help propel the water along, with farmers footing the bill, according to the New York Times.

It isn't easy to know how agricultural firms drain much underground water because California doesn't require the detail to be disclosed.

And the sinking will persist as long as California's droughts last.

RELATED ARTICLE: Yuan Longping, the "Father of Hybrid Rice," Dies at 90; Here's How He Changed the World

Check out more news and information on Agriculture in Science Times.