While scientists work to develop medications and treatment regimens to combat COVID-19, the SARS-CoV virus has begun to unleash new troops-Variants of Concern (VOC). As a result, developing medicine to combat the coronavirus and its hazardous variations is a new problem. A new study has identified a novel treatment that is highly successful in preventing severe COVID-19, which provides hope.

Scientists from the University of Pennsylvania School said the drug diABZI, which promotes the body's innate immune response, exhibited substantial efficacy against the SARS-CoV-2. The drug also worked against the South African version B.1.351, a VOC. DiABZI may also aid in the treatment of other coronaviruses that cause respiratory infections, according to the research. 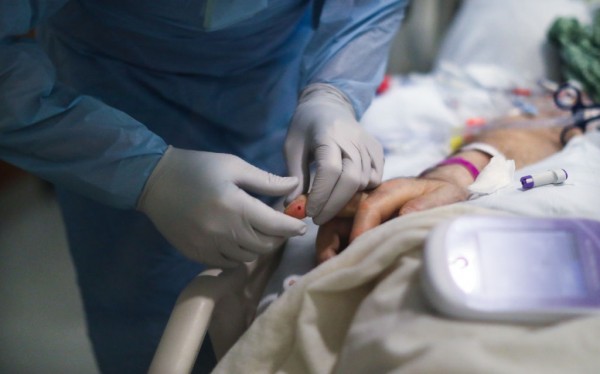 (Photo: Mario Tama/Getty Images)
A blood sugar check is performed on a COVID-19 patient in the Intensive Care Unit (ICU).

Dr. Sara Cherry, the senior author of the study, said only a few medications had been identified as game-changers in the fight against SARS-CoV-2. "This paper is the first to show that activating an early immune response therapeutically with a single dose is a promising strategy for controlling the virus, including the South African variant B.1.351," Dr. Cherry said in a CTV News article.

The World Health Organization (WHO) has declared four versions of SARS-CoV-2 as VOCs as of May 2021: P.1 (Brazil), B.1.617 (India), B.1.351 (South Africa), and B.1.1.7 (South Africa) (UK). B.1.351, for example, is significantly more contagious than the original Wuhan virus. The SARS-CoV-2 virus targets epithelial cells in the respiratory tract at first. In the respiratory tract, the innate immune system-the body's initial line of defense against pathogens-identifies harmful viruses by detecting their particular molecular patterns.

Under a microscope, the researchers watched human lung cell lines infected with SARS-CoV-2 to better understand this defensive response. Eurekalert said the virus's surprising ability to conceal caused the immune system's early diagnosis and response to be delayed. As a result, the scientists hypothesized that medicines or small compounds with drug-like qualities could be developed to trigger this immune response in respiratory cells sooner and prevent severe COVID-19.

The researchers wanted to find antiviral agonists-chemicals that bind to a specific receptor and cause it to elicit a biological response that could stop SARS-CoV-2 from infecting people. They did this by running 75 medicines through a high-throughput screening system that targeted sensing pathways in lung cells. Under the microscope, the effects of these medications on viral infection were seen. There were nine probable candidates found. Science Daily said there were two cyclic dinucleotides (CDNs) that remarkably reduced the stimulation of interferon genes (STING).

CDNs are notorious for their limited effectiveness, according to Dr. Cherry, and make for ineffective medications. As a result, the researchers decided to put diABZI-a newly developed small-molecule STING agonist-to the test. The US Food and Drug Administration (FDA) has not yet approved diABZI. However, it is currently being investigated in clinical studies for cancer treatment. Scientists discovered that diABZI was found to have a significant inhibitory impact against many strains through interferon signaling, including B.1.351.

Potential Drug Against Other Coronaviruses

As a result, the discovery adds to the evidence that diABZI does increase interferons for protective immunity. The outcomes of the study, according to Dr. Cherry, strongly imply that diABZI could be an effective treatment for the SARS-CoV-2 virus, preventing severe symptoms of COVID-19 and containing its spread.

DiABZI has been discovered to inhibit human rhinovirus and parainfluenza replication in cultured cells, in addition to SARS-CoV-2. As a result, the authors believe that it will be effective against various respiratory viruses.

"We are now testing this STING agonist against many other viruses. It's really important to remember that SARS-CoV-2 is not going to be the last coronavirus that we will see and will need protection against," Dr. Cherry concluded in a statement published on the University of Pennsylvania's website.