Smiling Robot: How Does This Scientific Invention Respond to Human Facial Expressions?

Using a combination of two immensely complex fields, scientists have recently been able to invent robotic systems including a "smiling robot" that has the ability to think, act and learn on its own, within some limitations.

A Forbes report specified that for many years, the intersection of artificial intelligence and advanced robotics has continued fostering groundbreaking and exceptional innovation.

So far, the robotic systems seen at present in hospitals, airports, or even restocking shelves in grocery shops, as reported on CNN, are quite visibly robotic in nature.

Meaning, they are not similar or understanding human nature. Instead, these presently-existing robotics are advanced machines that churn out reactions and actions based on data and models. 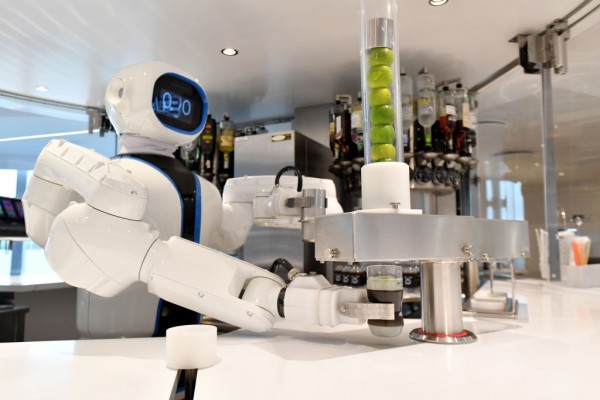 (Photo: Anthony Devlin/Getty Images for MSC Cruises)
Guests receive drinks from Rob, the robotic bartender during the first sailing of the brand new ship MSC Virtuosa, the first cruise to depart the UK since lockdown on May 20, 2021, in Southampton, England.

One growing, yet intriguing perspective is that probably the next leap in robotic artificial intelligence is filling the gap between robots and humans even further, and that's making these inventions more human-like robots.

A Columbia University laboratory is embarking upon this precise aspect and just last week, it announced some of its most recent work on the animatronics, as well as robotics space.

The main page of the laboratory explains the ability to produce intelligent, not to mention, generalizable facial expressions vital for creating human-like social robots.

To date, progress in this field is hindered by the fact that every facial expression should be programmed by humans. More so, to adapt robot behavior in real-time to various situations that transpire when interacting with human subjects, there is a need for robots to be able to train themselves minus necessitating human labels, not to mention quick action decisions and general acquired knowledge to a different and new context.

The research lab describes how it dealt with the said gap by designing a physical "animatronic" robotic face with soft skin, and by developing a vision-based, self-supervised learning context for facial imitation.

In general, this technology is said to be quite jarring. As evident in the video shown on Columbia Engineering's YouTube video below, Eva an animatronic robotic face with soft skin is able to recognize and copy the person it's looking at, specifying a somewhat, tailored and curated reaction structure.

More so, the said video is a description of the facial mimicry's process, which involves Eva analyzing human facial landmarks, learning from them, and producing a reactive facial structure in its own face to match that of a human it is seeing.

Such technology is possibly a massive step into the healthcare artificial intelligence, as well as robotics space. Specifically, if this learning algorithm can be perfected to not just imitate human emotions, but react to them appropriately, instead, it may possibly an innovative, yet controversial addition to the healthcare innovation's realm, a similar report from Robotics & Automation News specified.

Take, for instance, the utilization of robots for social needs. During the height of this COVID-19 crisis, so much emphasis was placed on the harmful impacts of social isolation and loneliness.

Even though the notion behind robotic companionship is not novel, a lot of experts in the field contend that probably, social and behaviorally-trained robots can offer some break or breather for loneliness.