Skywatchers will be able to observe June's full moon, often known as the strawberry moon, on Thursday, June 24.

The Algonquin tribes of North America are supposed to have coined the term "strawberry moon," NASA said.

NASA's Gordon Johnston, who writes monthly articles on lunar activity and other skywatching opportunities, said the Maine Farmer's Almanac initially made the 'Indian' names for the full moons in the 1930s. 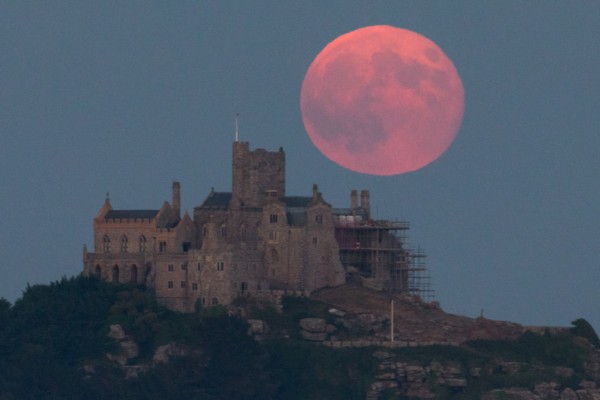 (Photo: Matt Cardy/Getty Images)
MARAZION, ENGLAND - JUNE 28: A full moon rises behind St Michael's Mount in Marazion near Penzance on June 28, 2018, in Cornwall, England. Tonight's strawberry moon, a name given to the full moon in June by Native Americans because it coincides with strawberry picking season, comes as parts of the UK continue to experience heatwave weather and record-breaking temperatures.

"According to this Almanac, as the full moon in June and the last full moon of spring, the Algonquin tribes called this the strawberry moon. The name comes from the relatively short season for harvesting strawberries in the northeastern United States," he said per SciTechDaily.

Why Is It Called Strawberry Moon?

According to some studies, the term may refer to the moon's color at this time of year since the full moon is closest to the summer solstice shines through more atmosphere than at other times of the year, making it more likely to have a reddish color, at least for northern regions of Europe.

The light that passes through more of the Earth's atmosphere appears red, which is why sunrises and sunsets have such a distinctive hue.

Meanwhile, the full moon in June is known by a variety of other names. The mead moon or honeymoon is an old European name for it, referring to an alcoholic fermentation process.

The full moon in June is also known as the berries ripen moon, the hot moon, and the egg-laying moon, according to The Old Farmer's Almanac.

How Can You Classify A Super Full Moon?

Newsweek said there are no official rules when classifying a moon as a supermoon. Different publications have varying definitions for it, too. In general, the term refers to a moment when the moon is both full and quite close to the Earth in its orbit.

How To Watch The Supermoon?

The full moon will technically occur around 7:40 p.m. UTC (3:40 p.m. EDT) next week. However, full moons can appear full for up to three days to the naked eye, according to the National Radio Astronomy Observatory.

Gianluca Masi, the founder of Europe's Virtual Telescope Project, has said that he will broadcast a live stream of the strawberry moon rising above Rome. He claimed that it would be the last supermoon of 2021.

In any case, the Virtual Telescope Project stream, which is slated for 3:00 p.m. EDT, can be viewed on the project's website.

RELATED ARTICLE: Astronomy 2021: Your Guide to The Full Moons, Eclipses, And Meteor Showers This Year!