Carbon dioxide emission has been the measure of how much we harm the environment, and its reduction a marker of progress towards saving it. In a new study, researchers found a new material to use in converting the harmful gas into valuable 1-butanol.

The research team, led by Dr. Jaeyoung Lee together with Minjun Choi, Dr. Jin Won Kim, and Prof. Sungyool Bong - all from the Gwangju Institute of Science and Technology, South Korea - has discovered a new conversion method that turns carbon dioxide into 1-butanol through the use of a copper phosphide material in the cathode. The process also skips the process of CO dimerization, which is a necessary process in the electrochemical conversion of CO2.

Researchers presented their novel method in the report "Formation of 1-Butanol from CO2 without *CO Dimerization on a Phosphorus-Rich Copper Cathode," appearing in the latest ACS Energy Letters. 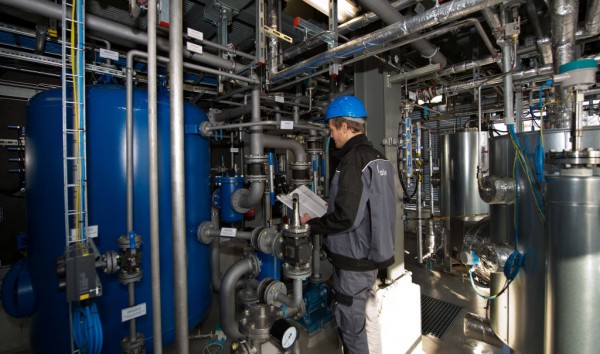 (Photo: Photo by Arno Burgi/picture alliance via Getty Images)
Engineer for renewable energies and environmental technology and employee of Sunfire GmbH, Bosse Schulz, discusses the functions of a conversion reactor (blue) during a press tour at the Sunfire GmbH plant in Dresden, Germany, 14 November 2014. Dresden-based Sunfire wants to make a petroleum replacement out of water and carbon dioxide with a million euro pilot facility.

The Race to Reduce and Reuse CO2 in the Atmosphere

A variety of anthropogenic activities - from deforestation to the burning of oil, coal, and fossil fuels - helps in the accumulation of carbon dioxide (CO2) in the atmosphere. This, in turn, leads to climate change and global warming. Its mounting risks and hazards have propelled the scientific community to find ways to turn CO2 into other reusable forms. One of the feasible forms CO2 can be converted into is 1-butanol, a "fusel alcohol" that has found promise as a fuel for vehicles. Should it be made available in larger quantities, it would help reduce our current dependence on fossil fuels, which still run a huge part of machines and automobiles today. According to the US Energy Information Administration, a little over 60 percent of the country's electricity generation comes from the different forms of fossil fuels.

One of the most common methods of recovering and converting CO2 into reusable materials is the electrochemical reduction reaction (CO2RR). Basically, it uses electricity and electrical machines to catalyze or encourage chemical reactions that break down carbon dioxide into a reduced form, converting it into other reusable forms. This emerging technology is currently limited by the metal catalysts being either expensive or potentially toxic, or both.

A similar and recent effort in finding greener and more efficient catalysts was made by a team of chemists from Boston College. They developed a multi-catalyst system that converts carbon dioxide into methanol.

In their paper, researchers from the Gwangju Institute explain that their method is a combination of faradaic and autonomous nonfaradaic reactions. Their method is among the first instances where a copper phosphide cathode material works as a highly product-selective electrocatalyst.

The new cathode material allows for the induction of a carbon to carbon coupling reaction, bypassing the formation of carbon monoxide, a chemical byproduct known as a critical intermediate for existing conversion systems that use copper-based cathode materials.  They confirmed its performance through surface-enhanced infrared absorption spectroscopy, which showed that their cathode yielded 1-butanol with an incredibly high Faradaic efficiency of greater than three percent.

Check out more news and information on Carbon Dioxide in Science Times.