There are numerous viral infections that are present across the globe, but no antidotes have been discovered yet to be labeled as ultra-effective against the virus. The Technical University of Munich or TUM's experts has recently developed a new method regarding the matter by utilizing nanotechnology. 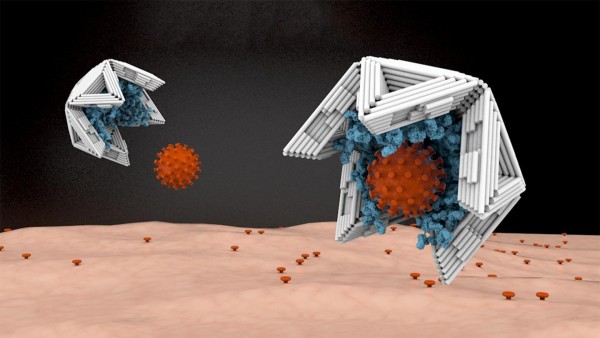 TUM have been studying nano-capsules that could trap and neutralize viruses using the DNA structure. The efficacy of nano-capsules has already been examined previously against types of diseases that correlate with viruses, such as hepatitis and adeno-associated viruses under cell cultures. Fortunately, the nano-capsules have also potential against the deadly types of coronaviruses

Most of the bacterias have corresponding antibiotics for treatment, but with acute viral infections, only a few antidotes are available and are being used by the medical community. Vaccinations can prevent some of the severe infections, but developing them takes a lot of research and consumes a lot of time, reports PhysOrg.

To create an effective solution against viruses, researchers from prestigious institutions including the Technical University of Munich, Brandeis University, and the Helmholtz Zentrum Munchen have collaborated for new approach development. This proposal includes inventing a nanostructure made from human genome material, or DNA, that could lock and dissolve viruses easily and safely.

Biomolecular nanotechnology expert Hendrick Dietz from the Technical University of Munich, along with his team, has been researching the structure of the nanomaterials that make up a virus. Dietz and his team have been on the study long before the COVID-19 pandemic even began.

Their study relates to some of the principles back in 1962, also known as the CK theory, analyzed by the biology and biophysics experts Donald Caspar and Aaron Klug. The bioscientists are the first to discover the geometrical studies revolving around the physical features of viruses. Based on the principle, Caspar and Klug are able to identify what composition does the protein envelopes of viruses have.

Through the biological principles of virus protein geometry, Deitz is able to study and produce a concept of the nano-scaled artificial hollow bodies comparable to the size of viruses. This development also triggered an idea where the artificial virus could potentially work as a trapping agent. Based on the study published in the journal Nature Materials entitled "Programmable icosahedral shell system for virus trapping," these artificial nano-capsules will be directed in line with natural virus-binding molecules, making the grip stronger and trapping the virus effectively.

Dietz said that constructing an artificial hallow body against viruses is challenging since the DNA-structured objects that were initially developed were not able to trap a whole virus due to size differences. This was resolved by reconstructing the artificial DNA plates in a larger geometrical model.

The geometric features of the nano-capsules are also improved for trapping efficacy and flexibility, with its shape altered to semi-triangles and binding points on the edges. This will enable the nano-capsule to open and close to trap viruses.

The experts then irradiated the nanocapsules in UV light and coated its surface with glycol and oligolysine to keep itself from being washed away easily by natural body fluids. If successful, the nanocapsules combined with the antibodies could block virus cells to up to 80 percent rate, and might even result in a complete entrapment.