The China National Space Administration (CNSA) released a new set of photos from Mars obtained by its rover Zhurong.

The device's parachute and its partially burned but still intact protective casing can be seen on the ground in the photographs.

According to the CNSA, the rover shot the photos from 350 meters away from the landing spot. 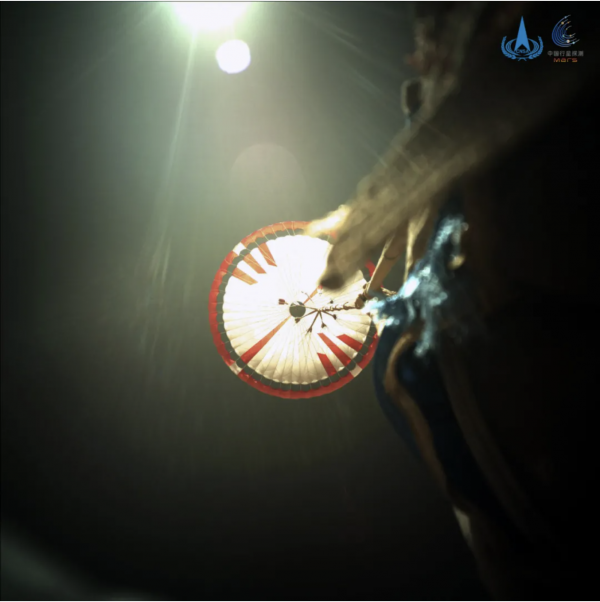 Space.com said Zhurong was about 100 feet away from its backshell when the Mars rover shot the photographs. According to the same story, the backshell was in charge of protecting China's Mars Rover and lander on their journey to and through the planet's atmosphere.

The report, citing Chinese officials, said the entire rear cover structure after aerodynamic ablation is readily discernible, as is the attitude control engine diversion hole on the back cover.

China's Mars probe was launched in July of last year and landed on Mars on May 14 of this year, making it the second country after the US to land and operate a rover on the Red Planet.

It has traveled around 450 meters of Martian surface since landing.

Zhurong has been working on Mars for 60 Martian days - more than 61 Earth days - with intentions to spend a total of 90 Martian days exploring the planet.

The six-wheeled rover is investigating an area called Utopia Planitia, looking for indications of water or ice that could reveal whether Mars has ever supported life.

According to Space News, the rover is equipped with tools that can analyze Mars' surface components and minerals, as well as a climate station and a ground-penetrating radar.

Zhurong is smaller than the NASA Perseverance rover, exploring the planet with a tiny helicopter named Ingenuity, standing 1.85m tall.

Elon Musk, the CEO of Space X, and Senator Bill Nelson have congratulated China on the photographs. Both acknowledged their delight at the achievement, which is seen as a step forward in the worldwide space community.

Tianwen 1, China's first wholly domestic Mars mission, was launched successfully in July 2020 and arrived in Mars' orbit in February of this year.

Tianwen, which means "quest for heavenly truth," is the name given to China's exploration program, unveiled by the China National Space Administration (CNSA) in April of last year. It was called after poet Qu Yuan's epic poem.

The Tianwen 1 mission aims to gather vital information on Mars, including its ecosystem, geological structure, and atmosphere. The Zhurong rover, a lander, and an orbiter make up the Mars mission.

Tianwen 1 orbiter will be working for at least a year in Mars' time. This equates to around 687 days on Earth.