NASA's Jupiter moon mission is set to take place in the last quarter of 2024, and the preparations of the space agency for the space flight have already begun, with SpaceX winning a $178 million contract to launch NASA's Clipper spacecraft. The said vessel is bound to Jupiter's moon, Europa, and will conduct a scientific observation on the satellite's surface.

Clipper is slated for liftoff on October 2024 from the Kennedy Space Center, Florida, estimated to arrive in Jupiter's orbit on April 2030. The probe will conduct an in-depth study of over 50 close flybys of the moon for over 4 Earth years, reports Bloomberg. 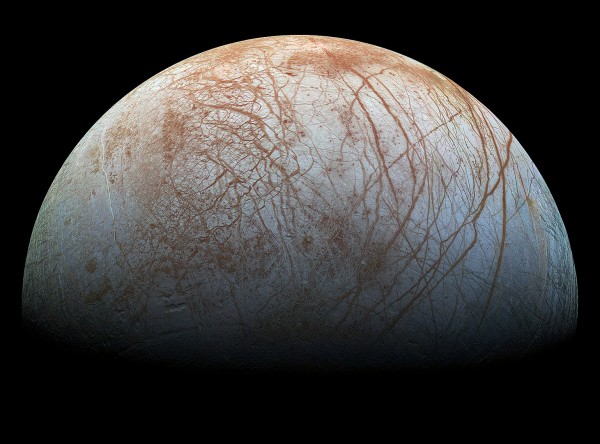 Jupiter's 6th moon, Europa, has a unique smooth surface with a few craters intriguing researchers since its discovery. According to NOAA, there are only 3 known craters on Europa with an estimated diameter of more than 3.1 miles. For a moon, Europa has a relatively small amount of craters.

Another noteworthy feature of Jupiter's moon is that the level surface changes very little in altitude across the satellite. Despite relatively no elevation change on the satellite, there are unique lines encircling Europa. The latest theory hypothesizes that these distinct lines cold be markings from volcanoes or even geysers.

Europa is also one of the 5 known moons in our solar system that have an atmosphere. The atmosphere is small with a pressure of no more than 1x10-8 MB compared to the average range of pressure on Earth at roughly 1000MB. Underneath the surface layer of Europa lies a 30 mile-deep ocean, theorized by researchers. Another theory suspects that the distinct lines on the moon result from Europa's crust expanding and fracturing, which causes cracks to be filled with water and freeze.

ALSO READ: Japanese Billionaire Yuzaku Maesawa of SpaceX dearMoon Mission Will Fly to Space Soon; Who Will Join Him?

Originally the US Congress instructed NASA to launch the future lander and Clipper via Space Launch System, which the agency has been building to launch probes and people to deep=space destinations. However, the development of NASA's SLS has been riddled with delays and cost overruns in recent years. The mega rockets haven't flown with their first missions already slated for NASA's upcoming Artemis Lunar explorations program.

Hence, it isn't clear if an SLS would be clear for the Europa Clipper mission. The wording of the US House of Representatives proposed 2021 budget includes provisions for NASA to launch Clipper by 2025, and in 2077 the future lander will follow and use SLS if available. This has greenlighted the possibility of using commercial alternatives to NASA's SLS.

This January, SPACE.com reports that the Europa Clipper team was told from a memo from NASA's Planetary Missions Program Office that its members should cease planning to use SLS to launch Clipper and would instead be flown via a commercial rocker, namely on Elon Musk's SpaceX.

Clipper's journey to Europa will be provided by SpaceX's Falcon Heavy, the most powerful rocket ever developed.