Astronomical Events August 2021: What to Watch Out Next Month

To begin with, blue moons are uncommon. As a result, the one expected in August will be especially notable for stargazers. The summer's third full moon arrives just after Jupiter and Saturn cross paths in the night sky. The three heavenly bodies will emerge at the same time in the same place according to MSN News. Here is all you need to know about the August 2021 event so you can make the most out of it. 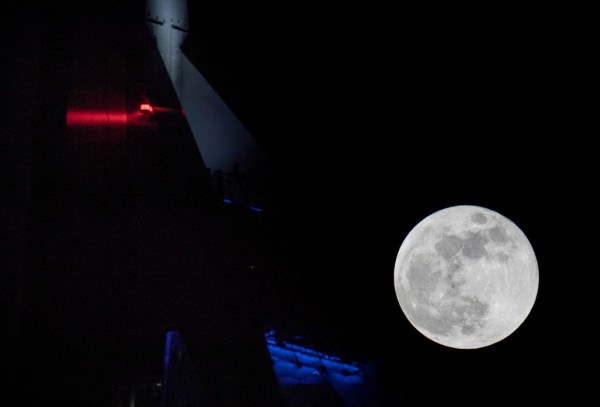 (Photo: Matt Cardy/Getty Images)
PORTSMOUTH, UNITED KINGDOM - JANUARY 31: A Super Blue Blood Moon rises above the Spinnaker Tower in Portsmouth on January 31, 2018, in Portsmouth, United Kingdom. A Super Blue Blood Moon is the result of three lunar phenomena happening all at once: not only is it the second full moon in January, but the moon will also be close to its nearest point to Earth on its orbit, and be totally eclipsed by the Earth's shadow. The last time these events coincided was in 1866, 152 years ago.

The name "blue moon" has nothing to do with the color of the satellite. Mental Floss said it is sometimes used to refer to the second full moon in a calendar month, although this is a misinterpretation. Sky and Telescope said that an inaccurate definition of blue moons was published in 1946, which finally became accepted.

EarthSky mentioned that the third of four full moons in an astrological season is the original, more obscure meaning of blue moon. This notion is best exemplified by the full moon rising on Thursday, August 22, 2021. Another Mental Floss report said that it would also be a sturgeon moon, as the full moon in August is known in folklore.

How to See Blue Sturgeon Moon

To help you identify the optimum time to view the Full Moon, you can get moonrise and moonset times for your area with the help of Time and Date.

Keep an eye out for the Blue Moon. According to another Time and Date report, the next seasonal Blue Moon will not occur until August 19, 2024.

Saturn and Jupiter at Opposition

Forbes said the blue moon in August coincides with Jupiter's opposition. Earth is considered to be in opposition when it passes directly between a planet and the sun. At this moment, Jupiter will reflect the most light from our solar system's star, making the gas giant extremely brilliant in the night sky. Jupiter will be in opposition on Tuesday, August 19, 2021, but its full brightness will be seen on the day of the full blue moon.

Saturn can also be seen on Thursday, August 22. The planet will be in opposition earlier this month, August 2, 2021, yet it will continue to shine strongly for the next few weeks. Sky gazers will not need to look far if they want to view Saturn, Jupiter, and the blue moon all on the same night.

In The Sky explained that Saturn would pass close to the moon on August 20, appearing about 3.8 degrees north of it. Vercalendario added that Jupiter would pass near the blue moon on August 22, the actual date of the event. It will pass within 4.1 degrees of the moon and will be visible on the upper side. During that August week, all three bodies will appear unusually bright and near.

How to View Planets

People can see when Saturn and Jupiter rise, set, and pass straight overhead in your local time by checking out Time and Date's website.

Even though the planets will be at their brightest at opposition, people would want to look at them via a telescope because the celestial bodies will appear to the naked eye to be stars. According to EarthSky, one would need a telescope with a magnification of at least 25 times to see Saturn's rings in detail, and a magnification of at least 100 times to observe Saturn's rings.

The nice part is that even though the planets will be in opposition on certain days, there is no need to hunt for them. You can even start looking for planets now, as they will be visible in the night sky.

Furthermore, throughout the rest of the year, both worlds will appear to shift westward, making them visible earlier in the evening sky. If you have children or grandchildren who go to bed earlier, this will make stargazing easier.

RELATED ARTICLE: Astronomy 2021: Your Guide to The Full Moons, Eclipses and Meteor Showers This Year!