China recently unveiled the world's largest planetarium in Shanghai. The astronomy museum was designed with curved geometry that mimics the geometry found in the cosmos, with three overlapping arcs representing the orbital movement of the planets. This huge astronomical project of China was built in partnership with the US Architectural firm Ennead Architects. 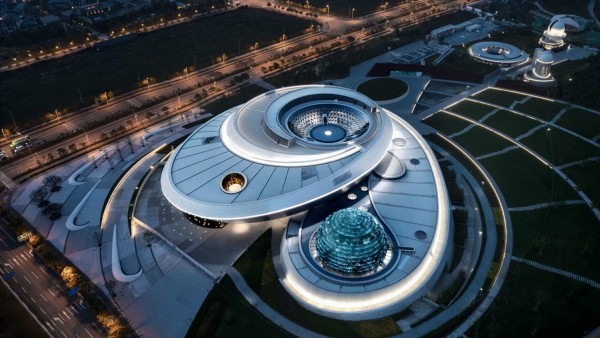 The Shanghai Astronomy Museum will be accessible to the public this year, with a lot of scientific discoveries to showcase. The 420,000 square feet planetarium is a gigantic branch of the Shanghai Science and Technology Museum that will exhibit astronomical advancements through its observatory, wide planetarium, and solar telescope that scales to 78 feet. According to Daily Pakistan, the design and architecture of the Shanghai Astronomy Museum were selected and curated by Ennead Architects, the winner of the 2014 international competition for the Shanghai planetary modelling.

Thomas J. Wong, the lead designer of the Shanghai Astronomy Museum, said that their team put up incredible efforts to the architecture to fill the impact of the museum. He added that the meticulous building architecture is intended to be an astronomical-inspired design, with the arcing lines and cosmic feels to complete the visitors' overall experience in the planetary.

Wong's team selected a design influenced by one of the unsolved astronomical puzzles, the 'three-body problem.' This conundrum is a mathematical riddle for ages that contains the motion of stars, moons, and planets with their gravitational correlation. According to the three-body problem, the calculation of the motion between two celestial bodies is possible but adding a third body results in disorder in the mathematical equation.

Wong explained that the complexity of the Shangai Astronomy Museum was equipped with the reimagined set of orbits in a three-body problem. He said that this geometry is the best choice for the planetary instead of a simple circle. The architects translated the mathematical riddle into a design composed of features with distinctive curvature, including a sphere, oculus, and an inverted dome, that intertwines with each other. What's interesting is that the sphere, oculus, and inverted dome represent the moon, sun, and stars, respectively.

The oculus is located at the astronomy museum's main gate entrance, which serves as a time-telling device through the help of sunlight passing through the ceiling and to the floor, similar to the ancient sundials our ancestors have invented.

The Shanghai Astronomy Museum also houses a moon-like planetarium theater that exceeds the museum's building, creating a moonrise representation. In addition, the moon theater appears to float, with space beneath that the visitors can walk through. The museum's rooftop is designed as an inverted glass dome that can be used by visitors to observe the night sky peacefully.

Along with the Shanghai Astronomy Museum, Ennead Architects is also part of constructing the American Museum of Natural History's famous Rose Center for Earth and Space, located in New York. According to CNN, Wong said that the two buildings are a 'cosmic cathedral' sharing the same astronomical experience.