Detecting gravitational waves could be challenging for scientists due to background vibrations from earthquakes, traffic, and other human activities typically drown out these disturbances in the fabric of spacetime. Now, two astrophysicists have proposed an alternative site that would be much quieter: the Moon.

Science Magazine said some of the most powerful phenomena in the cosmos, such as collisions between black holes and neutron stars, create gravitational waves. However, because these cataclysms happen hundreds of millions of light-years away, the waves that wash over Earth alter reality by minuscule amounts - as little as a thousandth of a proton's diameter.

Detecting them necessitates the use of ultra-sensitive equipment like LIGO and Virgo. These labs shoot lasers through 4-kilometer (2.5-mile) tubes, bounce them off mirrors, and analyze how the light reflects on sensors. When a gravitational wave passes by, the laser beam wobbles slightly, providing scientists with a startling amount of information.

The issue is that Earth is a crowded place. Even though these facilities are deep below, they are subject to noise and vibrations from the surrounding environment. Is it a real-life ripple or simply a vehicle passing by overhead?

How GLOC Would Make it to the Moon

What if we built an observatory on the Moon, where the night sky is almost completely unobscured? The Gravitational-Wave Lunar Observatory for Cosmology (GLOC), made by astrophysicists Karan Jani of Vanderbilt University and Avi Loeb of Harvard University, would use the Moon's orbit and environment. The said feature would locate and analyze mind-blowing events we may otherwise miss. 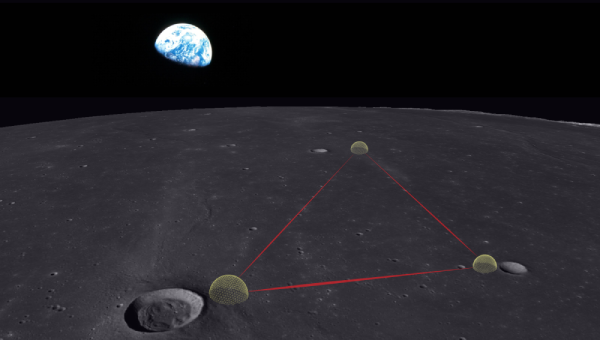 (Photo: Karan Jani)
Conceptual design of Gravitational-wave Lunar Observatory for Cosmology on the surface of the moon.

Space.com mentioned that GLOC would be able to see around 70% of the visible cosmos. It might detect gravitational waves, dark matter, black hole mergers, and neutron stars, among other things. Its sensitivity would be exceptional since there would be no atmosphere, light pollution, or noise from the ever-shifting tectonic plates to cope with, as there would be on Earth.

Jani and Loeb, who just published a paper titled "Gravitational-wave Lunar Observatory for Cosmology," aims to go beyond monitoring black hole and neutron star signals for seconds at a time. For the time being, it is the maximum amount of time we can capture them on Earth. These messages take the form of gravitational waves, which vary in frequency depending on the object generating them.

Because the Moon's orbit is short enough for it to take up signals from many different directions, GLOC would be able to study gravitational wave signals for weeks. It orbits Earth every 27 days. Because neutron stars are large objects that spin consistently, they tend to emit continuous gravitational waves with the same frequency and amplitude. Each kind of gravitational wave is produced by binary black holes, white dwarf stars, and neutron stars, constantly circling closer and closer. The lunar orbit can also assist the observatory in determining the exact location of the signal.

So, unless we create a lunar metropolis anytime soon (which is unlikely), GLOC does not have to be located on the Moon's dark side. New Atlas said experts believe GLOC could recognize wavelengths that would be nearly difficult for Earth-based equipment to hear. As the rate of cosmic expansion continues to accelerate, scientists are hunting for a mysterious, yet still speculative, forced to explain it. There is no way to see dark energy directly. Only by studying gravitational interactions between things in space can it be deduced. In order to explore dark energy, GLOC will be able to get signals from black hole collisions that reach back in time.