Delta Surge in UK Seen Dropping: How are COVID-19 Vaccines Contributing to the Decline?

One of today's headlines in health news discusses the drop in the United Kingdom's Delta surge after its peak in mid-May. Many now wonder if other nations are to follow suit.

According to an Intelligencer report, on Thursday evening, two of the leading news sites, various media outlets revealed the bullet points of an internal Centers for Disease Control and Prevention slide presentation that explained a recent change in mask regulation.

In the said presentation, the Delta variant was compared to chickenpox in terms of how infectious it is. Specifically, it said the variant might spread by people regardless of if they have been vaccinated or not.

However, The Daily Renegade stated in a similar report that vaccinated people are eight times less likely to get infected by the Delta variant compared to the unvaccinated. 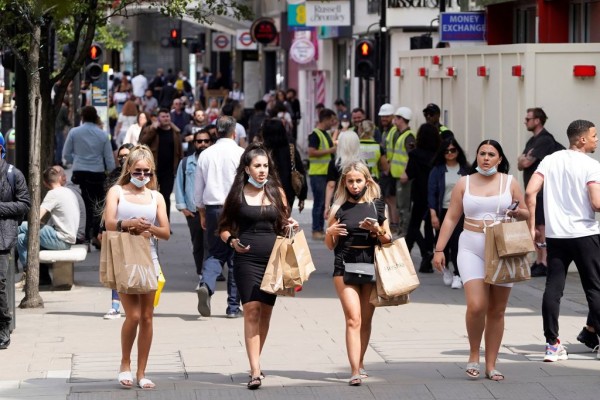 (Photo: NIKLAS HALLE'N/AFP via Getty Images)
The Delta variant of COVID-19, first detected in India, is estimated to be 40 percent more transmissible than the Alpha variant that caused the last wave of infections in the UK.

This report cited two sides of transmissions which include getting infected and infected others. According to a report from Women's Health via Yahoo! Life, it is quite clear, as even the slides of the CDC highlight that vaccinated people are much less possible to get infected than unvaccinated people.

Even people infected with the virus result in spreading the virus at rates approximately the same as those who have not been vaccinated.

Furthermore, no matter how fast the disease is spreading, it causes a much smaller death toll since, perhaps, vaccination has eliminated 90 percent or more of the total COVID-19 death risk of the UK.

In countries with roughly similar vaccination rates to the United States, the surge has peaked already and started a fast drop, proposing that such a turn is quite possible within a few weeks.

Delta Surge in the United Kingdom

In the UK, as earlier mentioned, the Delta surge started in mid-May, and its peak was in the middle of July. Meanwhile, in the Netherlands, the variant started at the beginning of last month, and now, it has already peaked.

If the United States followed the trajectory of the UK, the Delta surge, which started about a month ago, would peak by early next month.

Moreover, while there may still be some increase in mortalities in both the UK and the Netherlands, given the gap between COVID-19 infection and eventual results, in neither nation have mortalities reached even "one-fifteenth of the level of local winter surge," the Intelligencer report also specified.

Will Nasal-Spray Vaccine Help Stop Spread of the Virus?

However, the authors wrote, several COVID-19 variants have arisen that could at least partially avoid the immune response the vaccines induce.

Such strains could serve as a caution against complacency. They also encourage science and medicine experts to discover a different vaccination type, delivered in the form of nasal spray.

To date, the piece shows nearly like a Delta prediction. Although injected vaccines do not lessen cases of symptomatic COVID-19 and prevent numerous severe illnesses, "they may still allow for asymptomatic infection," the authors said.

An intranasal vaccine, they continued writing, was a solution. With just a quick spray in the nose, these vaccine types are formulated to strengthen the immune defense in the mucosa, stimulating an antibody production called immunoglobulin A, which can inhibit infection.

A related report on the drop in the Delta variant surge in the UK and the US is shown on ABC News's YouTube video below:

RELATED ARTICLE: COVID-19 Delta Variant: Who is Most at Risk Between Vaccinated and Unvaccinated People?

Check out more news and information on Herd Immunity on Science Times.