Arp 195, a triple galaxy entangled together, was recently caught in an image captured by NASA's Hubble Space Telescope. The Arp 195 cosmic region exhibits an activity of what appears to be a 'gravitational tug-of-war' between the three galaxies contained in the distorted and stretched cosmic expanse, according to NASA. 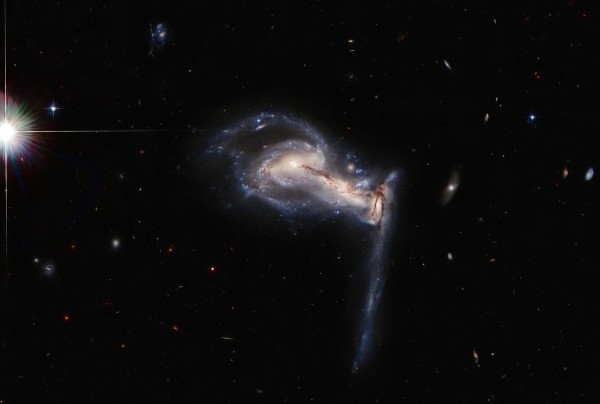 Arp 195 belongs to a group of galactical locations observed by various institutes, including the California Institute of Technology, the Carnegie Institution of Washington, and Mount Wilson and Palomar Observatories. The said galaxy collection is also known as the Atlas of Peculiar Galaxies.

The captured image of the Arp 195 exhibits an unusual feature of the three galaxies as they cluster. In the Arp 195, two galaxies compress a separate galaxy in the middle, making it distorted and elongated. In addition, a long tail connected to one of the galaxies can be observed on the right part of the Arp 195.

This specific tail is also known as the tidal tail. It is usually expected to show up after a group of stars and gases were pulled out and stripped from their parent galaxies while in the process of galaxy collisions.

HST scales to the size of a typical school bus, and this is only one of the reasons why so much power was being relayed to the telescope to grab high-quality imaging of celestial occurrences like the Arp 195.

The solar-powered telescope, unfortunately, was giving signs of tapping out. According to a report by Mashable, NASA announced earlier this year that the Hubble Space Telescope had been offline for a couple of weeks due to computer issues.

However, NASA is confident that the telescope that has been with us for decades will continue to give its peak performance and will run for the coming years.

The Hubble Space Telescope will continue its astronomical examination in partnership with other observatories, including its successor, the James Webb Space Telescope, to find new research on our voyage to understanding the far-reaching cosmos.

Along with capturing the Arp 195 image, the Hubble Space Telescope previously managed to gather details from a nearby galaxy Andromeda. The Milky Way, Andromeda, and other galaxies are also entangled in a galactic halo that contains numerous cosmic materials like stray stars and gases.

The galactic halo was almost impossible to identify as it only exhibits a faint structure. But what makes it interesting is that the halos from the Milky Way and Andromeda were almost touching with each other. This only means that the Andromeda galaxy is nearby than we expected. With the gathered examination, NASA announced that the two galaxies would collide.

Galaxy collisions are normal phenomena in the cosmos. However, potential life forms may be affected due to the friction between galaxies. As they collide, there is a possibility that the group will merge as one, parallel to the activity taking place at the Arp 195.

However, EarthSky reports that no effects will be felt as of now since the observable impacts on our planet due to the interaction between the galaxies will just be observable 4 billion years from today.