This Supernova Shrapnel Star Is Running Away From The Galaxy, 2M Miles an Hour

Researchers have found an unusual star running away from our universe after a supernova explosion.

Researchers examined a star 2,000 light-years away that seems to be heading out of our galaxy at unbelievable speeds. The study titled "8.9 hr Rotation in the Partly Burnt Runaway Stellar Remnant LP 40-365 (GD 492)," claimed that the star, LP 40-365, is rushing out of the Milky Way.

Study co-author, J.J. Hermes of Boston University (BU), said in a statement that the star is traveling at about 2 million miles per hour and that it is almost certain to leave the galaxy. 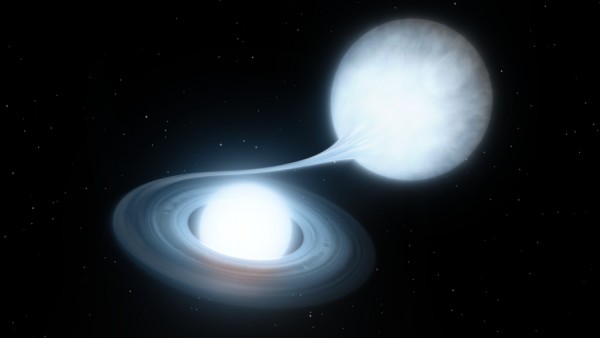 (Photo: Caltech)
Artwork showing a pair of white dwarfs in orbit around each other with an accretion disk. This illustrates what happens when one star begins to siphon material off its partner. The white dwarf stars are similar in size to earth, but they are 200,000 times more dense. ZTF is well-suited to detect binary star systems like this one.

A Shrapnel From A Previous Supernova Explosion

LP 40-365 is basically a "shrapnel" from a previous supernova explosion, researchers said in the same news release, pointing out why it seems to be in such a rush to leave the galaxy. NASA said that supernovas are the most massive explosions humankind has ever witnessed. This star was able to survive the cosmic catastrophe. The study's second author, Odelia Putterman, said that the runaway stellar seems like a slingshot from the explosion.

However, the spin of a star that has weathered a supernova explosion looks to be rather slow. According to BU, supernovas arise when a white dwarf star becomes too big and eventually explodes. If its partner star provides too much mass, a white dwarf in a stellar system with two stars may go supernova.

Too Much Mass From Its Partner Caused Supernova Explosion

The researchers thought it is not the companion star that got away. They said per IFL Science that it was the 'shrapnel' from the star that went supernova after receiving so much mass from its partner, based on the slowness of LP 40-365's spin.

In the study, the researchers explained that the survivor LP 40-365 was not the donor star. Instead, it is a largely shattered white dwarf's bound remnant that experienced advanced burning from an underluminous (Type Iax) supernova.

This research contributes to our understanding of what function these stars performed during the explosion, according to Putterman. The researcher went on to say that by knowing what is going on with one specific star, they may begin to comprehend what is going on with many other comparable stars that originated from a similar circumstance.

Another group of researchers claimed in a Phys.org article that a star shot itself out of orbit with another star due to a "partial supernova" in 2020. The Chandra X-Ray Telescope of NASA also obtained an image of the remnants of a star that had gone supernova and shared it on their official Instagram account. The photo revealed a companion star that had survived the explosion.