Nearby Star Resembles Young Version of Sun; Could Shed Light on How Life Began on Earth

NASA astronomers found a nearby star that resembles the mass, radius, and temperature of the Solar System's Sun when it was only 600 to 700 million years old. Scientists believe that this star could help shed light on how life began on Earth, MailOnline reported.

The star, dubbed as Kappa 1 Ceti, is discovered by NASA's Goddard Space Flight Center in Greenbelt, Maryland, and is about 30 light-years away from Earth. The Sun is now 4.6 billion years old, so finding an almost star that resembles the Sun in its youth could help understand the beginnings of the Solar System.

NASA added that learning more about Kappa 1 Ceti might help better understand how the Sun may have shaped the Earth's atmosphere. Part of the study involves understanding how coronal mass ejections could have affected Earth in any way. 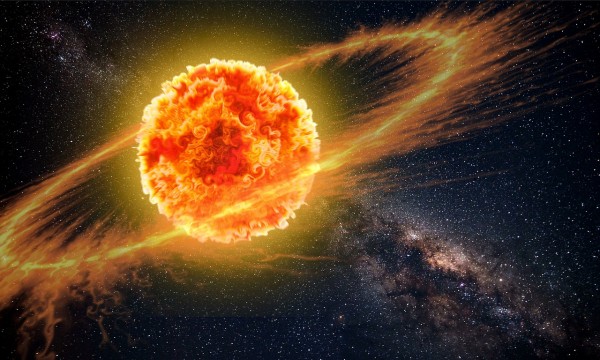 (Photo: Pixabay)
Nearby Star Resembles Young Version of Sun; Could Shed Light on How Life Began on Earth

According to Science Daily, younger stars release hotter, more vigorous stellar winds and more powerful plasma compared to older stars. These stellar winds may have an impact on developing planets, particularly on their atmosphere and chemistry that could catalyze the organic matter or building blocks of life on those planets.

Scientists believe that Sun might have spun three times faster in its younger years compared to now. Most likely, it had a stronger magnetic field and shot out more intense radiation. If Earth was already around at that time, the impact of solar particles might be experienced all around the globe and not only on its poles.

But the high-level solar activity may have pushed back the magnetosphere of Earth and provided it with the right atmospheric chemistry for the formation of biological molecules, unlike Mercury or Venus who are too near that it could be torched or perhaps too distant and neglected like Mars.

Astronomers believe that similar mechanics must be happening in other solar systems across the universe. Understanding what the Sun was like when the Earth was developing will help refine the search for stars with exoplanets that might host life in the future.

Daily Mail reported that the new model of Kappa 1 Ceti is based on the Alfvén Wave Solar Model, which works by inputting known information about the star to predict its stellar activity. Astronomers tested the model on the Sun, and it was validated and checked against observed data to ensure that predictions are correct.

The model is can also model the Sun's wind and corona with high fidelity, and scientists confirm that this model can be used on other stars to predict their stellar wind and investigate whether they have the requirements to host life or not.

The data from the Transiting Exoplanet Survey Satellite (TESS) and Hubble Space Telescope (HST) were used in previous studies to identify Kappa 1 Ceti as a young star and gather information about its magnetic field and ultraviolet emission line data.

The team is now working to look closely at the particles that might emerge during solar flares and the chemistry on Earth to get a solid idea of what the Sun was like in its younger years. They hope to use their model to map the environments of Sun-like stars that are in various stages of their lives, specifically the EK Dra star that is only 111 light-years away and is only 100 million years old.

Documenting stars at different stages of life and compare them to one another will help identify the typical trajectory of a star's life to tell how the Sun will fare in the future through the lens of the other stars.

They published the full findings of their study, titled "One Year in the Life of Young Suns: Data-constrained Corona-wind Model of κ1 Ceti," in the Astrophysical Journal.

Check out more news and information on Sun in Science Times.