Two massive fossils of new dinosaur species were recently unearthed in the northwestern region of China. The newly discovered fossils belonged to the sauropod family and were the first vertebrates excavated in the area. In recent years, a lot of fossils had been recovered from the sites in northwest China. Areas that are abundant in fossils are the regions of Xinjiang, especially the Turpan-Hami Basin. 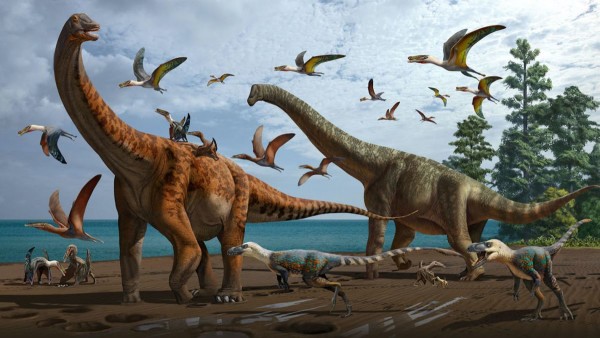 Some examples of fossils that were dug in the same areas are the famous flying reptiles, pterosaurs, and some intact eggs and embryos. In the recent study published just this week, a new fossil collection that includes spinal vertebrae and rib cages have emerged and are theorized to belong to two distinct species of dinosaur.

The paleontologists have examined the unknown prehistoric species specimens and named the two creatures that owned the fossils as the Silutitan sinensis and Hamititan xinjiangensis, derived from silk road translation in Mandarin the region of China they were discovered, and the Greek word for giant.

The Silutitan specimen is determined to have a massive size of up to 65.6 feet long. The same goes with the Hamititan specimen, where it spans up to 55.77 feet. Both of the recently discovered dinosaurs have a size comparable to the modern-day blue whales that are found in the vast oceans of the planet. The blue whale spans from 75 to 98 feet, which makes itself the largest living animal today.

The dinosaur fossils in China were unearthed through the collaborative effort between the Chinese Academy of Sciences and the National Museum of Brazil. The findings from the China fossils were published in the journal Scientific Reports, titled "The First Dinosaurs from the Early Cretaceous Hami Pterosaur Fauna, China."

The fossil specimens are determined by the scientists to have originated from 120 to 130 million years ago, sometime in the early Cretaceous period. The Silutitan and Hamititan species are believed to be under the sauropod family.

Sauropods are plant-eating prehistoric creatures that have unique physical features, including long necks and massive body sizes. Paleontologists believe that the sauropods are the largest animals that have trod the planet.

Among the newly discovered fossils of dinosaurs, there was a third specimen discovered. However, the last fossil has already been examined and studied before. According to a report by CNN, the species that previously owned the fossil is a dinosaur from the group of somphospondylan sauropod that existed between the late Jurassic to the late Cretaceous period.

The sauropod dinosaurs in China is still under investigation to determine their taxonomical classifications and specific family tree. In recent years, China was at its peak of paleontological contributions through the abundance of fossils being unearthed in the country's several regions. Along with the discovery of two new sauropods species, there have been other creatures that were recently excavated in China.

The September 2020 findings were published in The Anatomical Record, titled "A New Microraptorine Theropod from the Jehol Biota and Growth in Early Dromaeosaurids," and January 2021 findings in the Science Bulletin, titled "An Oviraptorid Preserved Atop an Embryo-bearing Egg Clutch Sheds Light on the Reproductive Biology of Non-avialan Theropod Dinosaurs."