The use of artificial intelligence (AI) has been growing for the past few years. It is now being used in a number of applications, such as in the security and military areas. Also, there have been inventions for the medical field and even a robot that could possibly write a theater play.

However, the movies that featured AI, such as The Terminator or The Matrix, make many adamant about the possibility of killer AI coming true in the near future. This means that robots or computers controlled by AI could possess their own personality and independently think for themselves, which could pose dangers to the existence of humankind. 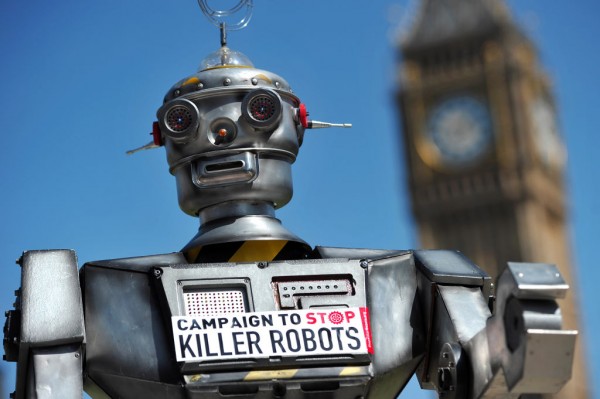 (Photo: Getty Images)
A mock "killer robot" is pictured in central London on April 23, 2013, during the launching of the Campaign to Stop "Killer Robots," which calls for the ban of lethal robot weapons that would be able to select and attack targets without any human intervention. The Campaign to Stop Killer Robots calls for a pre-emptive and comprehensive ban on the development, production, and use of fully autonomous weapons. AFP PHOTO/CARL COURT / AFP PHOTO / CARL COURT (Photo credit should read CARL COURT/AFP via Getty Images)

Could Killer AI Come True in Our Lifetime?

According to The Daily Star, AI developers are now discussing how to limit future AI-powered machines so they will not go rogue. According to the news site, AI specialist Matthew Kershaw believes that it is feasible that AI may reach alarming levels during the lifetimes of today's youth.

His comments sound like what Professor Stephen Hawking and SpaceX CEO Elon Musk have feared about AI. The news outlet quoted Professor Hawking, the greatest scientific genius of the modern era, who said: "The primitive forms of artificial intelligence we already have, have proved very useful. But I think the development of full artificial intelligence could spell the end of the human race."

Likewise, they also quoted Elon Musk, who agrees with Professor Hawking: "I think we should be very careful about artificial intelligence. If I had to guess at what our biggest existential threat is, it's probably that. So we need to be very careful".

However, Kershaw said that true artificial general intelligence that is powerful enough to think for itself will not be available anytime soon, given that even humans do not really understand what consciousness really means. He pointed out that even though existing AI-enabled computers can do incredible things, they still do not learn exactly the same way as children do.

Meanwhile, the UNESCO worries that AI-powered killer robots may someday arise because many scientists and businesses seek the approval of the use of autonomous weapons systems. On the other hand, the military ensures that the decision to kill or not to kill will always be the final decision of humans.

According to Accenture, the ultimate goal of artificial general intelligence (AGI) is to replicate the cognitive abilities of humans. It is sometimes referred to as strong AI because it aims to make machines capable of common-sense reasoning that humans apply all the time.

A human child could easily perceive and understand what is taught to them, like identifying what a car looks like. However, the conventional machine learning system today needs to be shown thousands of pictures of a car to identify one in a set of pictures.

Despite decades of preparing AI, humans are still at a young age and early on their journey towards true AGI. As of now, there are still many untapped potentials waiting to be discovered in AI systems that can be used in different applications.

RELATED ARTICLE: Will Artificial Intelligence Be Humankind's Messiah or Overlord, Is It Truly Needed in Our Civilization