The recent political upheaval in Afghanistan forced thousands of its residents to flee the country. However, it only caused deaths and chaos, as seen from the photos on the tarmac of Kabul's international airport.

Space.com reported that satellite imagery showed crowds of people surge at Kabul's Hamid Karzai International Airport amid mass evacuation from the city after the militant group Taliban has taken over Kabul and major cities of the country in the past days. 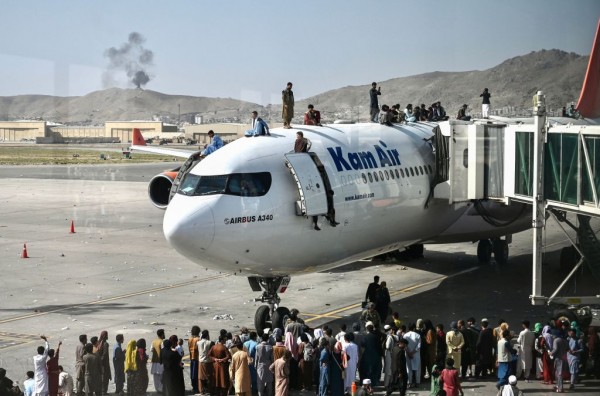 (Photo: Getty Images)
TOPSHOT - Afghan people climb atop a plane as they wait at the Kabul airport in Kabul on August 16, 2021, after a stunningly swift end to Afghanistan's 20-year war, as thousands of people mobbed the city's airport trying to flee the group's feared hardline brand of Islamist rule. (Photo by Wakil Kohsar / AFP) (Photo by WAKIL KOHSAR/AFP via Getty Images)

According to Space.com, the Colorado-based space technology Maxar Technologies collected the satellite images on Monday, August 16 at 10:36 am local time at the international airport of Kabul. The images showed that it was taken during the attempted mass evacuation of residents after the Taliban took over the city.

Satellite images show crowds on the tarmac and runways at Kabul's airport, while outside cars and people throng the streets. More scenes of chaos from the airport after the Taliban sweep into the Afghan capital: https://t.co/40U53tBMlP 📷 @Maxar pic.twitter.com/N5AS74H0gg

USA Today reported that the situation in Afghanistan created chaos and deaths among citizens. At least seven people were reportedly killed as United States troops tried to take control of the airport, which was overwhelmed by thousands of people trying to flee from the country. Maxar Technologies said that crowds were already on the runway and surrounding the airport.

"Security forces can be seen near one of the airport's main runways attempting to prevent crowds of people from moving toward other aircraft and from blocking flight operations," Maxar said in a statement, as quoted by Space.com. "Hundreds of people can also be seen at several of the airport perimeter gates and at intersections nearby," they added.

Moreover, The New York Times added that witnesses saw that the Taliban are now controlling access to the entrances on the civilian side of the airport. There are also numerous reports that Afghanistan's senior government officials have fled the country, especially the ex-president Ashraf Ghani. Many people blame him for the chaos that is now in Afghanistan.

Furthermore, the Times wrote that some Afghans are already clinging onto departing planes, while others crowded the tarmac after security lines were breached. All flights from Kabul's international airport have been suspended by nightfall.

How Satellite Imagery Help Us

According to a previous report by Space.com, the benefits of satellite imagery extend far beyond the borders of countries that have the capabilities of launching satellites. It does not show any borders and make continents look like a continuous stream.

For example, astronauts aboard the International Space Station that orbits around the world could pass 90% of the inhabited parts of the planet in just 90 minutes, would take pictures of the surface of Earth, and track down land use or wildfires from space.

They use the space station's SERVIR Environmental Research and Visualization (ISERV), a small telescope attached to a digital camera that looks out a window, to take photos of Earth.

They would know if something huge is happening, such as floods, volcanic eruptions, or fires. Local authorities use satellite images to pinpoint locations of where the activity is happening.

Helping people on the ground via satellite imagery linked university students in the US and developing countries. They map parts of the world that have not yet been covered using the data gathered by NASA via satellites.

Now, satellite imagery is helping assess the current situation in Afghanistan after it has succumbed to the hands of the militant group Taliban.