Two Albino Baby Alligator Eggs Hatch in Florida Zoo; What Cause This Loss of Pigmentation in Animals?

Two of the 18 eggs currently under care recently hatched, and for the second time in two years, Kenansville-based Wild Florida is welcoming a pair of albino baby alligators whose parents, Blizzard and Snowflakes, were both albinos themselves.

The park announced that a pair more of the pale alligators had been born after they got hatched from their eggs earlier this month.

Mail Online reported that a group of 18 eggs was produced in April, although, after several months of incubation, monitoring, and caring, the pair of eggs hatched.

Meanwhile, in a Click Orlando report, officials at the park said the new birth that stemmed from parents, Blizzard and Snowflake, both albinos themselves, "marks the second time in two years that albino alligators have hatched."

According to the co-owner and co-founder of Wild Florida, Sam Haught, they are very proud of their albino alligator parents and their Croc Squad team for helping the said hatchlings.

ALSO READ: LOOK: Alligator Popsicles in Oklahoma As Reptiles Stick Snouts Out of the Frozen Water 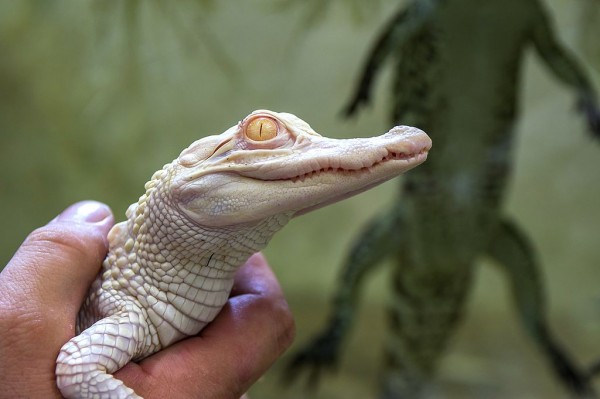 (Photo: GUILLAUME SOUVANT/AFP via Getty Images)
According to Wild Florida, it is believed that there are approximately 100 albino alligators worldwide, and just 12 are reported and recorded to be in human care.

Haught also said that with their Croc Squad managing the eggs, they're hoping that the alligators will help involve more visitors, tourists, and residents with their environment.

The rare quality stems from the so-called "leucism," a condition causing the loss of pigmentation. Pigmentation cells are unsuccessful in developing distinction, so the body of the reptile is not capable of producing pigment.

As indicated in the report, on April 30, 18 eggs were collected from Blizzard and Snowflake, although only two have hatched so far.

The Food and Agriculture Organization of the UN said, typically, an alligator's incubation is approximately 65 days.

The new Albino alligators, which have yet to be named, will be eventually displayed for guests at a yet-to-be-identified time in the future.

According to this report, 12-year-old Blizzard and 23-year-old Snowflake have been part of Wild Florida's "Gator Park" of 2017.

Ten feet in length, Blizzard is two feet longer compared to his partner, although there are other differences between this pair of albinos, as well, Wild Florida said.

Both eyes of Blizzard are an opaque white similar to that of milk, while the right eye of Snowflake is also opaque white but her left, with red birthmarks.

Because of the absence of melanin, this alligator species produces, its skin is totally white and sensitive to sunlight.

Therefore, the park's team constructed what it describes as a state-of-the-art, climate-regulated exhibit with an abundance of shade, as well as a heating lamp to keep the alligators comfortable in their then-new home when the Florida Wild first had them in 2017.

According to All Things Nature, animals become albino due to a lack of melanin or pigmentation in their body. Melanin is the one responsible for the different body arts' coloration.

If an animal is born without producing such pigmentation, it is then classified as an albino. This said report also specified that Albinism in animals is inherited and takes various forms, ranging from total albinism to "partial or patchy albinism."

Such a condition occurs when a recessive gene from every parent is passed on to its offspring. Essentially, true albinos fully lack melanin and show totally white or pinkish-colored scales or skin without any markings.

Related information about Blizzard and Snowflakes are shown on Animal Planet's YouTube video below: