Researchers detail a new approach to characterize airborne firebrands - small burning pieces of wood that allow a wildfire to spread. The approach is a beneficial tool in the wake of destructive wildfires from Australia to California.

Dubbed the 'emberometer,' the new assessment tool could offer valuable insights in understanding the size and trajectory of embers, which in turn could help responders understand the threat level of these disasters.

The new instrument, developed by the National Institute of Standards and Technology (NIST), relies on a host of 3D imaging techniques to characterize the flame. This emberometer is expected to help responders and fire engineers protect establishments from embers and gather valuable data for more cost-effective guidance in defining building codes.

The new approach is detailed in the latest Experiments in Fluids journal, in the research article titled "A New Approach To Characterize Firebrand Showers Using Advanced 3D Imaging Techniques." 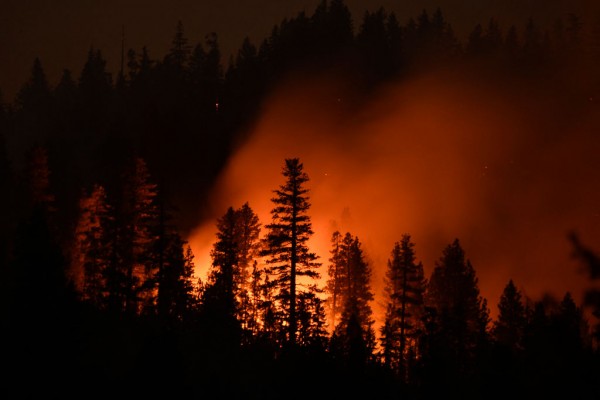 (Photo: Photo by PATRICK T. FALLON/AFP via Getty Images)
In this long exposure image taken at night, plumes of wildfire smoke rise as trees burn during the Dixie Fire on August 18, 2021, near Susanville, California. - The wildfire in Northern California continues to grow, burning over 626,000 acres, according to CalFire.

Usually, a wildfire is seen spreading through landscapes or connected combustible materials on the ground. However, blazing fires or disturbed landscapes usually shoot volleys of glowing embers into the air around them.

The National Weather Service defines firebrands as pieces of burning debris, including branches, twigs, logs, pine cones, that spread the wildfire either by rolling downhill or being carried as tiny embers through the fire convection columns.

What makes these tiny burning bits dangerous is their apparently random nature, making the effort to predict and characterize them virtually impossible. One approach that is commonly taken in the attempt to understand these firebrands is through collecting embers from water-filled pans.

Each ember is counted and measured but can only be done after the fire has been suppressed. Furthermore, this provides an inaccurate and incomplete picture since the embers are different and structures are actively swarmed by flaming debris during spread.

Because of their seemingly unpredictable nature, it is imperative to understand how their nature and behavior change while these burning pieces are still airborne. It led the NIST team, which includes combustion specialist Nicolas Bouvet, to develop what would be known as the emberometer.

The design of the emberometer looks like an uppercase H with two rows of point-and-shoot digital cameras on four corners. It is designed to be used up to a kilometer away, with its electronic parts shielded using fireproof materials to allow the setup to withstand extreme temperatures.

Researchers then used a technique known as particle tracking velocimetry. According to a 2018 review article, it measures particles suspended in a fluid, like burning embers in a column of air.

The emberometer uses its four feeds to trace the movement of brightly lit objects, like burning embers, as they pass through the coverage space in front of the instrument - a 70 cubic foot space. Additionally, the system can also trace the silhouette of these firebrands from four different views, allowing researchers to reconstruct the embers' 3D shapes digitally.

The emberometer was then tested how well it tracks burning wooden sticks fastened to the end of a rotating metal arm, which throws tiny firebrands in all directions as the arm spins. Researchers also used the tool to estimate the size of small plastic spheres dropped in front of the cameras.

They then conducted the next phase of their study in the NIST National Fire Research Laboratory, testing the emberometer against a firebrand generator blowing objects downwind.