Astronomers found an asteroid with the shortest orbit to date. The space rock orbits the sun every 113 days at 12 million miles. 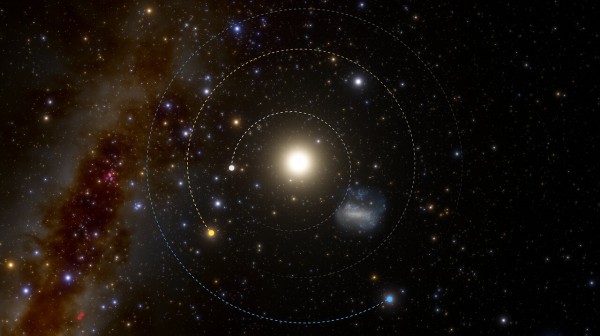 (Photo: CTIO/NOIRLab/NSF/AURA/J. da Silva (Spaceengine))
The fastest asteroid in the Solar System has been discovered at NOIRLab’s CTIO using the powerful 570-megapixel Dark Energy Camera (DECam) in Chile — the Sun’s new nearest neighbor. The illustration shows the locations of the planets and asteroids on the discovery night of 13 August 2021, as they would be seen from a vantage point above the Solar System (north).

In a statement, National Science Foundation's National Optical-Infrared Astronomy Research Laboratory (NOIRLab) said this asteroid experiences the highest general relativistic consequences of any known Solar System object" since it is so close to the sun.

According to Sheppard, the surface temperature of 2021 PH27 reaches about 500ºC (900ºF) at the closest point, which is hot enough to melt lead.

Though telescope time for scientists is precious, astronomers' international nature and curiosity of the unknown lead them to be willing to put their science and observations on hold to pursue fresh, exciting discoveries like these,' Sheppard said in the same statement.

2021 PH27's elliptical orbit intersects the orbits of both Mercury and Venus, making it the fastest-known rock to orbit the sun.

ALSO READ: Asteroid 3200 Phaethon Has a Comet-Like Tail That Fizzes Near the Sun, Here's Why

Space.com said researchers are unsure where 2021 PH27 came from at this time. Still, they believe it originated in the main asteroid belt between Mars and Jupiter and was ejected by 'gravitational disturbances from the inner planets.'

On the other hand, its high orbital inclination of 32 degrees suggests that it could be an old comet from the outer solar system caught into a closer brief orbit when moving near one of the planetary systems, the statement continued.

Experts suggest per the University of Hawaii that 2021 PH27's orbit is unstable, leaving it with two options: crash into Mercury, Venus, or the sun "after a few million years," or be thrown from the inner solar system due to the gravitational attraction of the inner planets.

Asteroids near the sun are difficult to spot because the star's light obscures them. Because of their proximity to the sun, some of them become overheated and split up. The asteroids may split up due to the planet's gravitational pull.

Sheppard explained in the statement that insights regarding the speed and makeup of these objects would come from the fraction of asteroids within Earth and Venus's orbit compared to that outside.

Sheppard said that understanding the population of asteroids within Earth's orbit is critical for completing the population count of asteroids near Earth. He added that several of the most likely Earth impactors might reach Earth during daylight and are challenging to detect in most surveys that observe at night, away from the Sun.

The space rock is approaching solar conjunction when it will be visible from Earth behind the sun.

It is projected to reappear in the early part of next year.