Allosaurus Not a Top Carnivorous Predator But a Scavenger During Late Jurassic, Study Confirms

Portland State University experts Cameron Pahl and Luis Ruedas determined that one of the top predators during the Jurassic period was not actually a flesh-eating giant, but rather a humble scavenger waiting for meat remains for consumption. The Allosaurus may be tagged in numerous paleontological studies as a large, scary carnivore during its time, but the recent paper suggests that they were in fact searching for food sparingly. 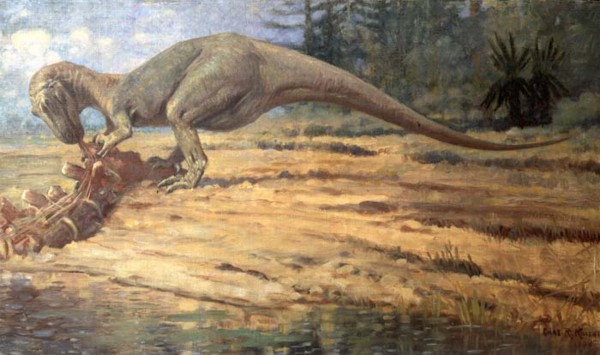 Allosaurus existed along with other famous dinosaurs that were recorded during the Jurassic period. While the allosaurus is considered a carnivore, most of the dinosaurs that co-existed with it are large, herbivore types such as Brachiosaurus, Supersaurus Apatosaurus, Brontosaurus, Diplodocus, Barosaurus, and Camarasaurus.

Sauropods or giant herbivores are dominant in the Jurassic period. Brachiosaurus, for example, is so large that it scales over 20 meters long and weighs over 58,000 kilograms. Compared to the Brachiosaurus, the Supersaurus was recorded to be 30 meters longs and weighs about 36,000 kilograms. Because of the herbivore-dominant diversity, most of the gigantic herbivore dinosaurs die of natural causes.

In this scenario enters the carnivore Allosaurus, who waits for the carcasses of dead animals and consumes them without killing. According to PhysOrg, this adaptive trait of Allosaurus has kept their family up and running throughout the prehistoric era without the use of brute force which most carnivorous animals do when hunting for their sustenance.

Allosaurus and the hypothesis revolving around them were tested in a series of examinations using the carcasses harvested from the Morrison Formation. This area contains a lot of prehistoric findings, including the greatest sauropods. Some of these sauropods are theorized to co-exist with Allosaurus and may have been part of their menu during the Jurassic Period.

To compare the carnivore vs scavenger dinosaurs, the experts studied the collected data from morphological attributes of dinosaur skulls. Along with the physical evidence, the scientists also consolidated every available information of the Allosaurus and its neighbors from fossil data.

Allosaurus is a Non-Predatory Theropod

Based on the findings, the skulls of the Allosaurus were not fit for a predator. Moreover, the scavenger dinosaur lacks the binocular vision feature on their sight senses to attack and target prey successfully. The Allosaurus' binocular vision is only 30 percent working compared to the Tyrannosaurus, and only 15 percent of the present-day Panthera leo or lions.

Allosaurus is known to have existed in the present-day western regions of North America, mostly around the vast lands that surround the Morrison Formation. The dinosaur lived abundantly in the late Jurassic period between 125 to 155 million years ago.

Allosaurus belongs to the group of carnivorous dinosaurs or theropods, which include the famous T-rex. With that said, some physical features of the scavenger are strikingly resemblant to those of the Tyrannosaurus. Being part of theropods, the Allosaurus was the largest carnivore identified during its own period, as it scales to almost 10 meters, and has a weight running from 1,800 to 3,600 kilograms. The study was published in the journal Ecological Modelling, titled "Carnosaurs As Apex Scavengers: Agent-based Simulations Reveal Possible Vulture Analogues In Late Jurassic Dinosaurs."