It nearly appears that there are six heavenly planets in its core in this mesmerizing image acquired by NASA's Hubble Space Telescope. There are just three of them: two galaxies and a quasar.

On its website, ESA said Hubble data also shows the seventh point of light in the very core, which is a rare fifth picture of the distant quasar. The space agency added that two galaxies in the background that serve as a lens cause this unusual occurrence.

Syfy Wire said what is happening here is due to a phenomenon is known as gravitational lensing, which Einstein predicted.

The outcome is an Einstein ring. A quasar's light is amplified as it travels between the gravitational fields of two foreground galaxies. The size of the two background galaxies is so great that our telescopes warped and amplified any light that passes close to them. 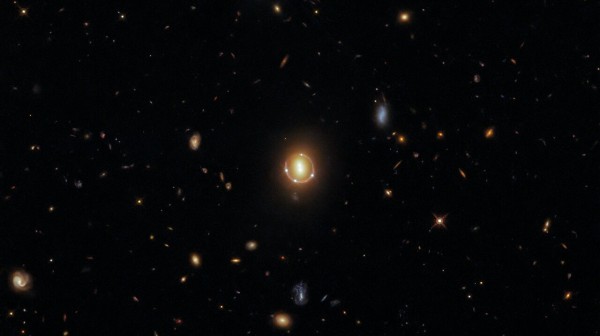 (Photo : ESA/Hubble & NASA, T. Treu)
The central pair of galaxies in this image are genuinely two separate galaxies. The four bright points circling them, and the fainter one in the very center, are actually five separate images of a single quasar (known as 2M1310-1714), an extremely luminous but distant object.

ESA called this system 2M1310-1714. During a galaxies survey, astronomers saw this by chance. The study was intended to get distances for over a million galaxies. Still, a scientist saw this lensing scenario when visually reviewing pictures of a quarter of a million galaxies. That's a significant amount of effort. However, a dozen lensed systems, including 2M1310-1714, were discovered.

Due to gravitational lensing, astronomers end up with a "seeing quintuple" phenomenon. Gravitational lensing makes the space fabric stretch, bending and magnifying light passing through it from a distant object to the point that humans on Earth may see many magnified pictures of the foreign celestial object.

The quasar in this image is farther from Earth than the pair of galaxies in between. Still, due to their massive mass, their light has been twisted to magnify their appearance. The galaxy pair seems to be encircled by four quasars as a result of this. Though, a solitary, lonely quasar sits far beyond them and beyond their reach.

Hubble had captured gravitational lensing before, like Science Times previously reported. The method was employed just last month to obtain a picture of a faraway galaxy. Last but not least, the process may be applied to detecting black holes.

Meanwhile, the James Webb Space Telescope has been approved for launch into space. The machine is being readied for shipping to its launch site following the successful completion of its final testing.

Webb's narrative, according to NASA, is one of perseverance-a project involving hundreds of scientists, engineers, and other professionals from 14 nations and 29 states, working in nine different time zones.

The project started in 1996 and was first released in 2007. However, a sequence of misfortunes-earthquakes, hurricanes, snowstorms, blizzards, wildfires, and a global pandemic (not to mention cost overruns)-delayed the project, which is now scheduled to launch before the end of the year.

Webb will ride the Ariane 5 for 26 minutes before disengaging and autonomously deploying its solar array, kicking off the month-long trek to its target orbit, roughly 1 million miles from Earth. Approximately six months following launch, scientific operations are scheduled to commence.