Astronomers have found three new ultra-faint dwarf galaxies linked with the neighboring spiral galaxy NGC 253 near the constellation Sculptor using the Hubble Space Telescope (HST). The newly discovered dwarfs are among the faintest systems observed outside of the Local Group so far.

Ultra-Faint Galaxy 'The Best Potential Fossils' of the Universe

The ultra-faint dwarf galaxies (UFDs) are the least luminous, dark matter-dominated, and chemically developed galaxies discovered. As a result, Clare People said astronomers consider them to be the best potential fossils from the early phases of the cosmos.

The Panoramic Imaging Survey of Centaurus and Sculptor (PISCeS) project is one of several astronomical surveys looking for new dim satellite galaxies, such as UFDs. A team of astronomers led by Burçin Mutlu-Pakdil of the University of Chicago used HST to study the region around NGC 253 in search of satellite dwarf systems as part of PISCeS. NGC 253 is the main galaxy in the nearby Sculptor group, located at a distance of 11.4 million light-years.

Researchers examined all of the pictures visually, looking for stars' spatially compact overdensities in the vicinity of NGC 253, and discovered three additional UFDs, in addition to the two previously found in 2014 and 2016. 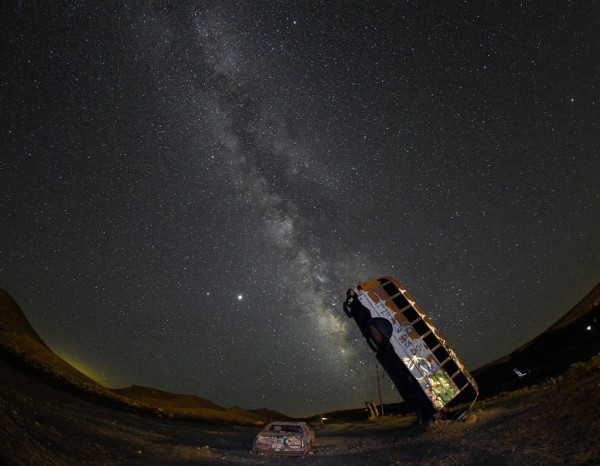 (Photo: Ethan Miller/Getty Images)
GOLDFIELD, NEVADA - JULY 18: (EDITORS NOTE: This image was shot with a fisheye lens.) The Milky Way galaxy as seen from the International Car Forest of the Last Church on July 19, 2020, in Goldfield, Nevada. The Car Forest is an outdoor art installation of junk vehicles planted in the ground vertically.

Researchers named three newly discovered UFDs, Florida News-Times said. These are Scl-MM-dw3, Scl-MM-dw4, and Scl-MMdw5. They are uniformly ancient (estimated ages of around 12 billion years), and virtually all of their stars formed in the early cosmos. Thus astronomers regard them as pure reionization relics.

Scl-MM-dw3 is the smallest of the newly discovered trio, with an elliptical half-light radius of roughly 362 light-years along the semi-major axis. The galaxy is approximately 264,000 light-years distant from NGC 253 and 11.34 million light-years away from the Earth. It has a stellar mass of 110,000 solar masses, according to calculations.

Scl-MM-dw5 is the largest and most massive of the three new UFDs, with a half-light radius of around 1,167 and a mass of roughly 140,000 solar masses. The galaxy is approximately 12.71 million light-years away from Earth, while NGC 253 is about 313,000 light-years away.

According to the researchers, the newfound galaxies have luminosities between magnitude -7.5 and -7.24, placing them with the darkest galaxies discovered beyond our Local Group.