NASA Astronauts Seek Augmented Reality Assistance to Repair ISS; How Does It Work?

Astronauts onboard the International Space Station is using augmented reality software to help them repair the station. The augmented reality technology is part of a more significant attempt to minimize communications latency, a major issue for future lunar or Martian missions.

The T2 Augmented Reality (T2AR) experiment, according to NASA, demonstrates how astronauts can utilize augmented reality to check and repair scientific and exercise equipment. The equipment that the AR system supports is important for sustaining group health and meeting research objectives.

T2AR is the first time Microsoft's HoloLens technology has been used in space using bespoke augmented reality software. The technology enables the astronaut to execute maintenance and inspection tasks alone. The most recent experiment builds on the Sidekick experiment, which took place in 2016. The treadmill was the focus of the present technological demonstration. Still, the platform is meant to be used across several systems aboard the ISS.

Earth-based space specialists are now having difficulty fixing broken tools in the large space stations because they are not stationed there. This is a big problem since they have all the necessary information to repair the equipment and systems.

I am creating A Spacecraft Interactive Virtual Reality Museum and have exhibits on the Apollo Spacecraft and Space Shuttle. I am trying to go from VR to AR and was wondering if you had any software and tutorials to suggest.

ALSO READ: AR/VR Glasses of the Future Need Not Be Bulky, Bug-Eyed with New Technology

This advancement in space technology is intended to provide astronauts with more effective instructions and assistance when making repairs in orbit. The T2 Augmented Reality project seeks to load software with commands for various types of activities that may be accessible by the International Space Station crew. 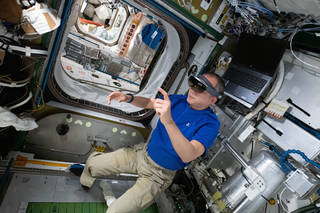 While International Space Station (ISS) will be decommissioned in 2024, NASA is making great strides in space after relying on rockets to sustain the EVE sun-observing equipment.

Noguchi used both hands to wield tools and do maintenance tasks while wearing the HoloLens AR glasses, thanks to the T2AR technology. The astronaut used the AR glasses to get step-by-step instructions and indications for conducting the repair without glancing away from the work at hand.

RELATED ARTICLE: Is The International Space Station On Fire? Smoke Scares Astronauts On Board