Artificial Clouds That Can Cover The Great Barrier Reef from Extreme Heat Developed; How Does It Work?

The Great Barrier Reef is always a topic in a couple or more of the news and scientific studies released every year. The usual issue correlated with the massive reef is the abnormal bleachings of corals due to the extreme heat in the region. Among the most inflictions recorded at the reef is examined in 2018 in the journal Nature, titled "Global Warming Transforms Coral Reef Assemblages."

According to the study, over 50 percent of the reef were already dead since 2016. Due to the accumulated reports of the reef being pushed to devastation, there seems no chance left for us to right our wrongs, but the latest study on The Great Barrier Reef suggests that we can still save the region of corals through a comprehensive effort. 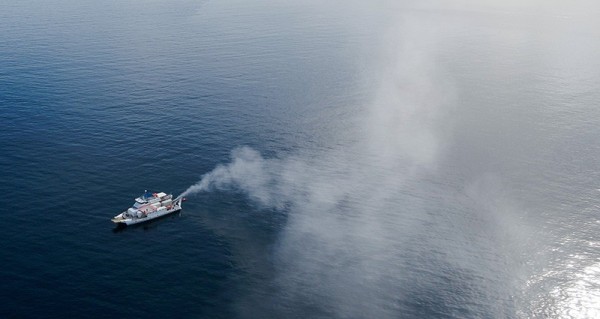 Nature recently published a report regarding the updates from Australian experts that attempts to determine the right measures on preventing the withering of the Great Barrier Reef. Among their key interests is to artificially manipulate the cloud hovering on the reef, blocking the excessive sunlight and preventing it from reaching the region's surface.

Southern Cross University experts are currently developing every possible way to protect the last of the greatest reefs on our planet. The team is lead by oceanography and engineering expert Danial Harrison on their venture in a refurbished vessel equipped with specialized instruments for examination and observation.

According to The Weather Network, the laboratory boat constantly travels 100 kilometers from the port to process the seawater into a cloud of mist. The experiment is being conducted using a cone-shaped turbine that has the capacity to produce brine droplets. The droplets are measured to fit the required evaporation across the ocean's surface as the vapor gradually elevates and mixes into the low-lying clouds.

ALSO READ: Solar Power May Be Used in 40 Percent of the United States by 2035 Solving 'Code Red' Climate Change

According to Nature, the mechanism of the laboratory boat can produce a cooling effect over the coral colonies through their 320 nozzles emitting nano-sized droplets constantly mid-air. To monitor and secure the displacement of the seawater plumes, the experts equipped the boat with specialized sensors side by side with another boat and a group of drones.

Based on the experts' estimate, the method of producing seawater mist alone would not suffice the number of vapors required by the low-lying clouds above the Great Barrier Reef. However, the initial analysis suggests that the approach could kickstart a more complex and widescale process. Harrison said that their team is confident that the current method will gradually improve the conditions above the reef.

To improve the methodologies utilized in the future, the team will gather more information on how the clouds precisely respond to the vapors brought upwards. The massive efforts to save the planet's largest reef were included in the study published in The Royal Society Open Science, titled "Large-scale interventions may delay decline of the Great Barrier Reef."

Harrison and the Southern Cross Univerisity's efforts are part of the world's first and only marine cloud brightening research that the Reef Restoration and Adaptation Program manage or RRAP. The marine program has been in collaboration with the government of Australia since 2018.