NASA recently discovered some clues on the northern hemisphere of Mars that points out the thousands of eruptions that happened when the planet is still flourishing with life. The evidence of the 'super-eruptions,' which occurred in an estimate of over 500 million years, was left in the region of the red planet called the Arabia Terra. 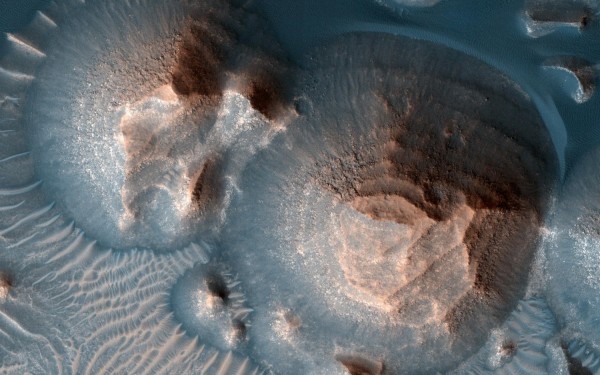 Volcanoes that are formed on Earth express massive activities that release byproducts as they undergo their terrestrial processes. There are also volcanoes recorded on our planet that emit more powerful eruptions than the standard explosions. But for every volcanic eruption, a lot of toxic gases and dust particles from numerous minerals are spitted out on the atmosphere. When these emissions exceed the normal eruption rates or are prolonged over a period of time, the materials may form into thick clouds that could block the incoming sunlight from space. In addition, excessive eruptions may influence the climate of the planet on a long-term basis.

Arabia Terra, located in the northern regions of Mars, was recently examined by NASA experts. What they found were patches of evidence that led to such powerful eruptions back when the Martian planet's life was still up and running. These volcanic activities that took place on Mars are not the typical volcanoes we see here on Earth, and due to the capacity of violence it can bring, experts dubbed the activities as 'super-eruptions.'

Over 4 billion years ago, it was theorized that the group of volcanoes that existed on the planet spewed compositions like carbon dioxide and sulfur dioxide. In addition, water vapors are believed to be present in these ancient emissions sa well. The volcanic eruptions in the red planet are estimated by experts have been expressed constantly for about 500 million years.

NASA's Goddard Space Flight Center geology expert and lead of Arabia Terra study Patrick Whelley said in the Mars Exploration Program report that each eruption can be a collective factor that has changed the future of climate on Mars. According to the geologist, the gases released during the super-eruptions may have thickened their planet's atmosphere or blocked the sunlight and leaving the atmosphere regions over the Martian soil colder.

400 million Olympic-size swimming pools, according to Slash Gear, are blasted out from the planet when a super eruption took place in the Arabia Terra. The emissions included several types of gas and other molten rock materials, both of which played a large role in thickening the ash located hundreds of kilometers up on the atmosphere of Mars. The results of eruptions in this capacity could put a hole right on a planet's face and forms a terrain called calderas.

Calderas are massive holes due to large impacts either from inside the planet or from foreign bodies. Calderas are also existent here on Earth and were previously examined to have a hundred-kilometer size. These giant holes are also identified on Mars, and based on recent studies, there are 7 massive calderas located in the Arabia Terra region alone. The study was published in the Geophysical Research Letters, titled "Stratigraphic Evidence for Early Martian Explosive Volcanism in Arabia Terra."