Nuclear war is among the modern-day threat that could spark any time. Much like any other warfare, using nuclear materials as a country's choice of weapon is not far from being implemented. Nuclear wars could indeed inflict many damages in many countries if ever they exchange nuclear attacks on each other. Among the most obvious after-effect of nuclear warfare is smoke. In reality, any smoke could stay up for a long period of time in our planet's atmospheric region, but nuclear emissions could being a significantly larger impact due to their compositions. 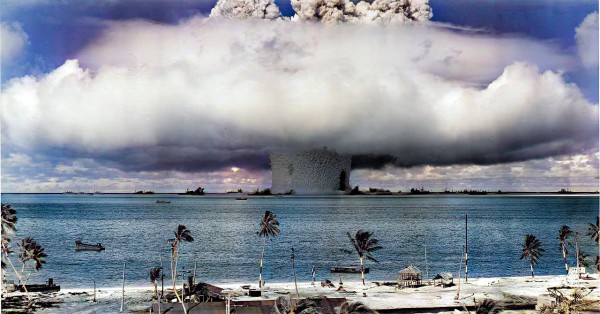 A new study was able to estimate the resulting damage that nuclear warfares could give away effortlessly to nature and most especially, to Eath's climate. In addition, nuclear wars could also destroy our remaining food resources through physical and chemical infliction.

Nuclear warfare could make our changing climate more harmful than before. The new study says that the aftermath of nuclear war can trigger anomalies both in climate change as well as food supplies for the following 15 years.

Nuclear weapons have the ability to drop their massive power on a certain area. Similar to other wars, this kind of strategized attack and defense riot. But the difference between nuclear warfare and the old, traditional conflict approach in between nations is that utilizing nuclear weapons gives more advantage than any medium. According to MirageNews, any region of a certain country could experience the effects of nuclear war once the smoke emitted during the warfare elevates up above the planet's stratosphere, inducing global warming and leading to a phenomenon called 'nuclear winter.'

ALSO READ: Artificial Clouds That Can Cover The Great Barrier Reef from Extreme Heat Developed; How Does It Work?

Smoke from Nuclear Warfares Can Deplete Ozone for 15 Years

Rutgers University collaborated with the National Center for Atmospheric Research and other institutes to learn more about the detailed effects we could encounter in case nuclear warfare takes place. The new study developed a new approach that records and analyzes data from the climate. This model has the capacity to formulate aerosol and nitric oxide compositions for nuclear-induced atmosphere simulation. The experiment also included some of the immediate effects of nuclear impacts such as ozone depletion and excessive ultraviolet lights trapped on the planet due to thick smoke.

When nuclear smoke is emitted into our atmosphere, the ozone could be affected and be thinner, making the lone protective sheet of Earth fade away and leaving us to burn from the sun. The recovery of ozone layers could run from several years up to decades, depending on how well we treat the atmosphere and provided that there are no additional damages inflicted to the ozone layer. If nuclear wars happen, one issue will only lead to another. Smokes from nuclear emissions will definitely trap harmful rays from the sun. it will take away the balance from the natural process and may endanger food supplies and even our health.

According to the study, a global nuclear war will undoubtedly heat the planet's stratosphere along with other effects that will uncontrollably accumulate to 15-year damage to the ozone with a peak loss of 65 to 75 percent. The recent findings are much larger than the 1980s prediction, where nitrogen oxides are present in the calculation but the effects of nuclear smoke were not factored. The study was published in the Journal of Geophysical Research: Atmospheres, titled "Extreme Ozone Loss Following Nuclear War Results in Enhanced Surface Ultraviolet Radiation."