NASA had an experiment in the 1960s that allowed animal researcher Margaret Howe Lovatt to teach dolphins to speak English. But Lovatt did end up training one dolphin, in particular, Peter. The dolphin, on the other hand, committed suicide.

The dolphin, according to Lovatt, is "coming of age." Peter grew close to Lovatt and would frequently touch himself on various places of her body, pushing her about like an "obsessed suitor." So does a dolphin have feelings? Here's what it means when they commit suicide

The two spent six days a week in seclusion in a semi-aquatic setting dubbed The Dolphin House as part of the experiment. The living environment was chosen to ensure that the English lessons were not disrupted.

However, Peter and Lovatt's connection quickly became physical. Lovatt implied in a Thought Catalog report that the dolphin liked to be near her.

Lovatt would send Peter downstairs to play with the female dolphins at the beginning of Peter's advances, but this proved too disruptive to the experiment. His arousals were all over the place.

As a result, a controversy arose. It was widely thought that Lovatt was injecting LSD into Peter and exploiting him. Despite the controversy, she continued to maintain a connection with the dolphin and fiercely rejected the accusations.

As the scientific community got more involved with LSD and less convinced, that connection of needing to be together evolved into a relationship of genuinely enjoying being together, wanting to be together, and missing him when he wasn't.

Although there was a reason for training animals to speak English, the dolphin experiment's funding was terminated. Lovatt and Peter were separated in Miami, and Peter was placed in a smaller, less-lit tank.

As a result, Peter took his own life. Daily Mail said the dolphin refused to breathe and sank to the bottom of the tank. 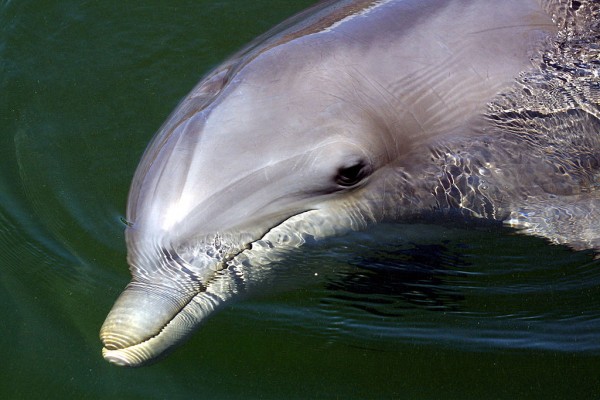 (Photo : Joe Raedle/Newsmakers)
388824 20: A bottlenose dolphin swims May 4, 2001 at the Dolphins Plus marine mammal research and education center in Key Largo, Florida. As pioneers in dolphin-human interaction they design programs for customers to learn more about dolphins and their environment as well as interacting with the dolphins on their level. Participants take turns entering the water and interacting hands-on with the dolphins at the direction of a trainer.

What Does It Mean When A Dolphin Committed Suicide?

The anecdote brought up an important point regarding captive animals. They also raise the question of just what it means for a dolphin to commit suicide. Brian Palmer of Slate studied the lengthy history of animal suicide investigations.

Palmer believes that it's impossible to determine if the animals are killing themselves in the same way as humans do because "suicide demands a collection of higher-order cognitive capacities." It necessitates awareness of one's own existence, the ability to speculate about the future, and the understanding that one's actions will result in death." But nobody knows if animals are capable of all of this.

Lori Marino, the founder of The Kimmela Center for Animal Advocacy, a behavioral neuroscientist, dolphin expert, believes that some animals are aware of themselves as individuals and can plan for their own deaths. Dolphins have the physiology to carry out their plans, she told HuffPost.

Marino says that the soft case for dolphin suicide involves a syndrome known as "failure to thrive," in which the animals cease eating and interacting until they finally "fade away."

A marine mammologist with the Humane Society told PBS that failure to thrive, caused by captivity's stressful environment, might be considered a kind of suicide.

It's also possible that a dolphin, like Peter, will decide to kill themselves in even more spectacular ways. In a white paper published with HuffPost, Marino argues for this possibility.

Furthermore, dolphins have the physical ability to commit suicide by intentionally retaining their breath till death, according to Marino. Their brains are also complex enough, she claims, to allow for a "sophisticated capacity for feeling" as well as "the types of cognitive processes that would be involved in complicated motivational states, such as those that precede thoughts of suicide."