NASA Hubble Space Telescope has discovered six dead galaxies from the early cosmos. These celestial entities appear to have run out of the cold hydrogen gas required to form stars, although most other galaxies were rapidly creating new stars.

The galaxies are effectively lifeless without the cool hydrogen gas required to ignite stars and produce new ones. Even if they have absorbed neighboring smaller galaxies and gas clouds, they are unable to renew. Whitaker said absorbing only just "puffs up" the dead galaxies.

Kate Whitaker, an assistant professor of astronomy at the University of Massachusetts, Amherst, and the study's lead author, said that all galaxies should be producing a lot of stars. At this moment in the cosmos, she said it had reached the pinnacle of star creation.

She asked in a press release: "So what happened to all the cold gas in these galaxies so early on?" Researchers uploaded the study, titled "Quenching of Star Formation From a Lack of Inflowing Gas to Galaxies" in the Nature journal. 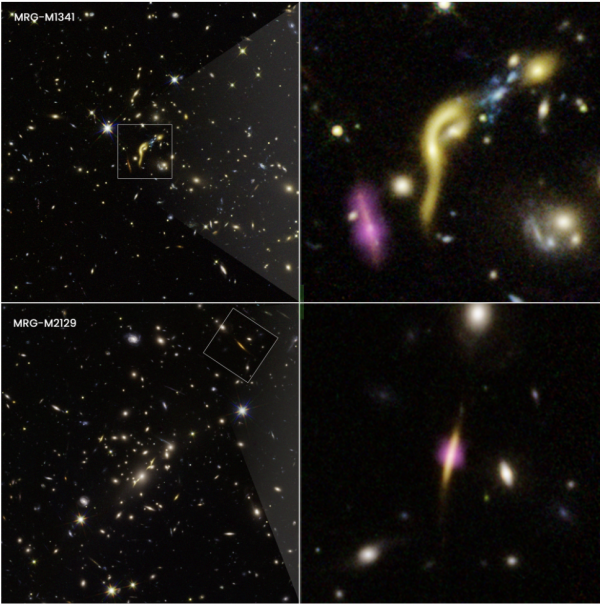 (Photo : Image Processing: Joseph DePasquale (STScI))
These images are composites from NASA's Hubble Space Telescope and the Atacama Large Millimeter/submillimeter Array (ALMA). The boxed and pullout images show two of the six, distant, massive galaxies where scientists found star formation has ceased due to the depletion of a fuel source – cold hydrogen gas. Hubble, together with ALMA, found these odd galaxies when they combined forces with the "natural lens" in space created by foreground massive galaxy clusters.

Scientists Baffled as to Why These Stars Died

It's still a mystery why these six galaxies passed away in the first place.

Whitaker said in a CBS News that there are several unanswered concerns that scientists will continue to investigate as more data becomes available.

The astronomers used Hubble to locate the galaxies. They then utilized the Atacama Large Millimeter/submillimeter Array (ALMA) in northern Chile to determine if the galaxies had cold dust, indicating cold hydrogen gas.

In the same press release above, scientists explained they wouldn't have been able to see the galaxies without a method known as "gravitational lensing," NASA said because they were so ancient and far away. As natural telescopes, the researchers used supermassive galaxy clusters that were closer to Earth. The gravitational pull of these clusters magnifies light from nearby objects. According to Nasa, when very distant galaxies are hidden behind a galaxy cluster, they look stretched and enlarged in pictures, allowing scientists to view features that would otherwise be lost without magnifying the galaxy clusters.

Whitaker said they could locate the distant, most massive, as well as first galaxies to shut down their star production by utilizing powerful gravitational lensing as a natural telescope. The researcher believed it was performing science in the 2030s or 1940s - with powerful next-generation satellite telescopes - but today by combining Hubble and ALMA's capabilities, which are enhanced by strong lensing.

According to Mohammad Akhshik, the Hubble observing program's chief scientist, the team gathered the biggest sample of these uncommon, dead galaxies in the early universe to date.

Researchers used the Resolving QUIEscent Magnified Galaxies at High Redshift (REQUIEM) program to examine these galaxies, the University of Arizona said. The expansion of space causes redshift, which causes light to be stretched and shifted toward the red end of the spectrum. The redder a galaxy looks as it gets further away from the viewer.

The REQUIEM team utilizes extraordinarily huge foreground galaxy clusters as natural telescopes to measure light from very distant galaxies. In a process known as strong gravitational lensing, the tremendous gravity of a galaxy cluster warps space, distorting and amplifying light from background objects. When an early, large, and faraway galaxy is placed behind a cluster like this, it looks stretched and magnified, allowing astronomers to examine features that would otherwise be difficult to detect.