The origins of a supernova seen initially above China in 1181 have finally been understood, ending a 900-year-old cosmic mystery.

Chinese and Japanese astronomers said the cause of the 12th-century explosion had been identified as Pa30, a dim, rapidly growing nebula that was as brilliant as Saturn and visible for six months.

Pa30, which surrounds Parker's Star - one of the Milky Way's brightest stars - fits the profile, position, and age of the historic supernova, according to experts.

The Milky Way has seen just five spectacular supernovae in the previous millennium, including the famous Crab nebula. Yet, the origins of all save the 'Chinese Guest Star' have been widely understood.

Although astronomers in the 12th century recorded the approximate position of the 1181 sighting in the sky, no verifiable explosion residue had ever been found until today.

A group of international astronomers from Hong Kong, the United Kingdom, Spain, Hungary, and France made the finding.

Researchers discovered that the Pa30 nebula is expanding at an extraordinary rate of more than 1,100 kilometers per second at this speed, Eurekalert said. To compare, travelling from the Earth to the Moon would take just five minutes with that speed. 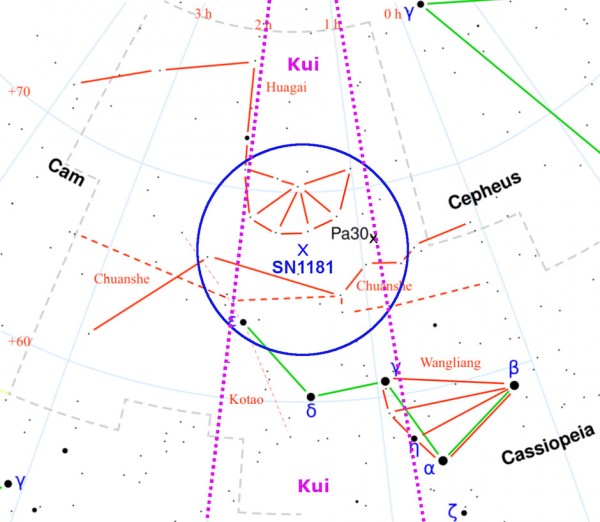 (Photo: University of Hong Kong Faculty Of Science)
The best estimated average position of SN 1181 is given by a blue cross surrounded by a blue error circle of radius 5 degrees.

They calculated the age of about 1,000 years using this velocity, which corresponded to the events of 1181.

One of the astronomers engaged in the study was Professor Albert Zijlstra of the University of Manchester.

Professor Zijlstra, citing the ancient records, said in a Phys.org report that the guest star is located between two Chinese constellations: Chuanshe and Huagai.

Parker's Star' is a good fit for the role, he said. As a result, both the age and the place are consistent with the events of 1181.

Professor Zijlstra added that only around 10% of supernovae are of this kind, and they are poorly understood.

He explained that the fact that SN1181 was faint at first but gradually faded matches this kind.

Zijlstra added that this is the only occurrence where they can examine both the residual nebula and the merging star and get a description of the explosion.

Combining all of this information, such as the age, position, event brightness, and historically documented 185-day length, implies that Parker's star and Pa30 are the equivalents of SN 1181, said Professor Zijlstra.

He said this is the only Type Iax supernova with a remnant star and nebula that researchers can study in detail.

According to Professor Zijlstra, it's satisfying to be able to solve a historical as well as an astronomical puzzle.

Researchers reported the results of the study, titled "The Remnant and Origin of the Historical Supernova 1181 AD," in The Astrophysical Journal Letters.

RELATED ARTICLE: Did a Black Hole Cause a Rare, Premature Supernova? Scientists Explain How It Happened