Among the most majestic marine life that has been recorded throughout evolutionary history is the leafy sea dragon. Located in the southern regions of Australia, the animals are among the rare species that adapted the ability of natural camouflage.

What is the Leafy Sea Dragon? 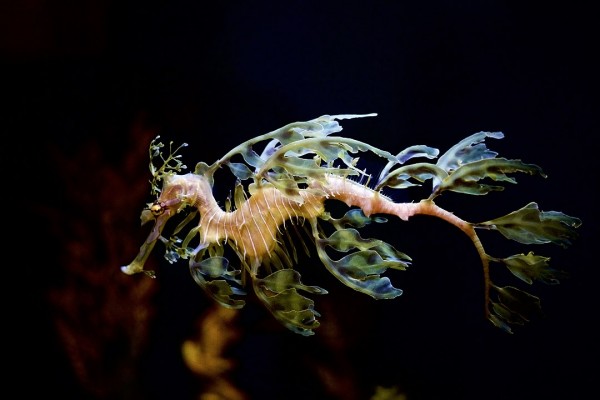 The leafy sea dragon is also called 'leafies' by the locals of Melbourne and Adelaide. The marine creature is known as the Phycodurus eques, and belongs to the genus that includes other types of sea dragons, seahorses, and pipefishes. The name of the species was inspired by the leafy sea dragon's own anatomical structure. Its body includes leaf-life features that span across its entire prawn-like physique. The collective design of the leafy sea dragon's form gives the animal the capability to exhibit camouflage. The sea dragon is fond of hiding itself in most of the seaweeds and kelps found in the depth of oceanic bodies.

The leafy sea dragon's diest is also comparable to the normal eating routine of most fishes and other marine life. Their main source of sustenance is the tiny planktons and crustaceans that are smaller from their size. By eating their underwater meals regularly, the leafy sea dragons could grow up to 30.5 centimeters in length.

The South Australian leafies move in a unique way. They use propulsion techniques to displace themselves from one place to another. Their transparent dorsal and tail fins are the most essential parts compared to the colorful parts. They need these see-through structures to perform their wanted movements. They also use these transparent parts to move their whole bodies and back and forth, mimicking the pattern of seaweeds for hiding purposes.

ALSO READ: Did Humans Have Tails? Mysterious Genetic Mutation Allegedly Made It Disappear Based on 25-Million-Year-Old Fossil

The camouflage of the leafy sea dragons is outstanding in terms of defense mechanisms. In a recent study, some leafies were observed to maintain their stationary form in a span of 68 hours. The body they have are also covered with bony plates and spike features that could protect them in case that their stillness underwater is attempted to be disturbed by prey or other marine animals. The findings from National Geographic, however, suggest that there are no creatures interested in hunting them. This led the expert to theorize that the leafy sea dragons may have beat the evolutionary prey cycle, or that they have outlived a species that we're unable to reach the modern-day biodiversity.

Both the male and female leafy sea dragons are found 160 feet underwater. In their deep habitat, the leafies conduct their breeding procedures, with the male population responsible for nurturing eggs and young leafies.

The leafy sea dragons' unique features are enough for aquatic collectors to poach them, leading to a decrease in their average population. In addition, the pollution that washes into their habitats brings a problematic risk to their natural activities. Fortunately, the sea dragons are not yet listed as endangered species, with International Union for Conservation of Nature or IUCN tagging the leafies as species of least concern. The comprehensive observation and analysis on leafy sea dragons were previously published in the Journal of Fish Biology, titled "Patterns of movement and habitat use by leafy seadragons tracked ultrasonically."