A new study revealed that the Einstein Ring discovered by NASA's Hubble Space Telescope a few days ago was around 9 billion years old. That was when the universe was barely a third of its current age of 13.8 billion years.

The celestial body might resemble a ring. However, Digital Trends said the source of its light is an old galaxy. The ring shape is caused by gravitational lensing, which occurs when light from a distant galaxy is bent by the gravity of a galaxy cluster between it and our universe.

This effect not only alters the galaxy's apparent form but also amplifies and illuminates it. Because of the lensing effect, the galaxy looks 20 times brighter, allowing Hubble to view it with the equivalent of a massive 48-meter-aperture telescope.

This ring is officially named as GAL-CLUS-022058s. However, it also goes by the moniker The Molten Ring, as it is located in the constellation Fornax (the Furnace). Since then, astronomers have been investigating the ring with additional equipment such as the European Southern Observatory's Very Large Telescope (VLT) FORS instrument. NASA also featured Einstein Ring as a Hubble picture of the week in December 2020. 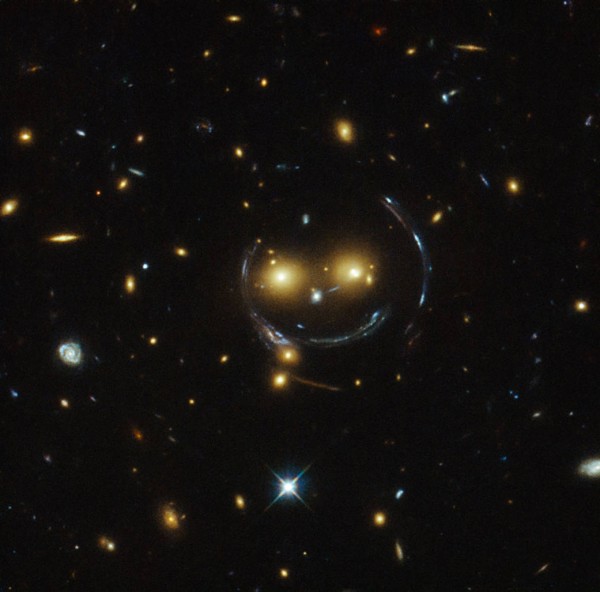 (Photo : NASA/ESA)
In the center of this image, taken with the NASA/ESA Hubble Space Telescope, is the galaxy cluster SDSS J1038+4849 — and it seems to be smiling. This phenomenon, crucial to many of Hubble’s discoveries, can be explained by Einstein’s theory of general relativity. In this special case of gravitational lensing, a ring — known as an Einstein Ring — is produced from this bending of light, a consequence of the exact and symmetrical alignment of the source, lens and observer and resulting in the ring-like structure we see here.

After Science Times reported how NASA Hubble Space Telescope revealed the Einstein Ring, researchers further studied to solve the riddle. Screen Rant said scientists developed a gravitational lensing model to investigate the impacts of this space phenomena and learn more about the physical properties of the galaxy seen in the image. Scientists calculated that the light from the source had traveled 9.4 billion light-years thanks to data obtained by the Hubble Space Telescope. In this example, the molecular gas was detected together with the Red Shift (a measurement of how much the wavelength of light has been extended).

The galaxy depicted in the Molten Ring is a normal galaxy with active star formation, according to Nikolaus Sulzenauer, a research student at the Max Plank Institute for Radio Astronomy in Germany and a part of the team behind this discovery. Furthermore, the galaxy looks to feature spiral arms, which are areas where star creation is vigorous. GAL-CLUS 022058s is located in the Fornax constellation in the southern hemisphere, which comprises four stars and translates to "furnace" in Latin. It's an apt name for a constellation that houses an object known as the "Molten Ring."

What Is Einstein Ring?

An Einstein Ring is a gravitational lensing phenomenon, Daily Mail said. It's a universal 'grand illusion' postulated as part of Einstein's general theory of relativity.

Einstein predicted that if gravity bent space like stretching and twisting a rubber sheet, pictures of distant things would be enlarged, brightened, and twisted into funhouse mirror views more than a century ago.

This is because their light would bend as it goes across the unseen fabric of space, passing through gravitational 'potholes' created by massing objects that got in the way of the light route to Earth on occasion.

The illusion itself can only be seen with large telescopes like the Hubble Space Telescope, launched in August 1990.

The Einstein Ring, which appears as a doughnut-like loop of light, is one of the most striking examples of this phenomenon.