Why Are More Acorns Falling? Excessive Drops of Nuts from Oak Trees Is Part of Normal 'Mast Year' Phenomenon

Oaks had been producing a massive amount of acorn nuts recently in some of the regions in the United States. Although seemingly odd to many, the excessive drop of acorns is actually normal and is part of a wider phenomenon known as mast years. The event consists of botanical activity that happens every two to five years. During the intervals, the oak tree produces an excessive amount of acorns that are 20 times larger than its standard production. Based on the reports, acorns falling throughout the mast years could be measured for up to 10,000 pieces.

What is Acorn Mast Year? 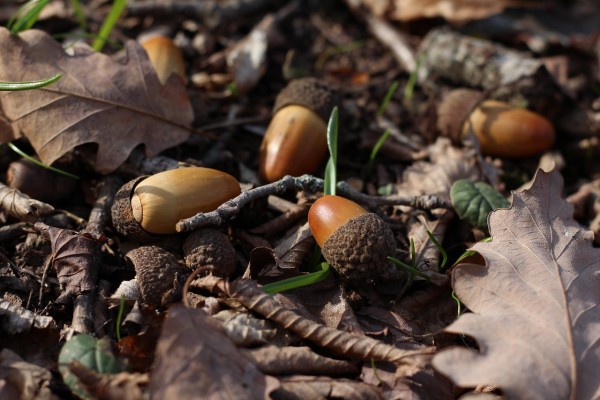 The massive acorn fall this year coincided with heavy rainfalls. This allowed tiny plants of the tree to grow again. The abundance of nuts could be felt in any place that has a towering oak tree present in the area. The acorn nuts could fall off more often on the roofs, and more crunches are expected on driveways.

One Michigan report stated that a resident experienced a massive acorn fall from two 'epic oaks that stand just right outside their house. Based on the incident, the abundance of acorns has been abnormally high than the observed rates from the previous months. Some states, however, do not experience the collective acorn drop rate. According to Yahoo News, Connecticut reported heavy nut fall in some areas and a lot more in others.

Acorn mast years, although known to have specific yearly intervals, are still considered random. The occurrence could just take place randomly without depending on any schedule. The acorn nut drop could occur between two to five years and could be intensified due to weather conditions with low temperatures such as during winter. Cornell University's Urban Horticulture Institute expert Nina Bassuk said that the flowering of the oak trees is heavily liked with the state of the weather.

Winter season that has milder conditions is expected to produce more acorns. This is because red and white oak trees are known to have adapted with it following their seed development during spring. On the other hand, extreme conditions during winter or cold temperatures during spring could lessen acorn production. In rare cases, oak trees could also produce no acorns at all.

Why are Acorns Falling More Than the Normal Drop Rate?

Bassuk added that the climate change that occurs in today's time could have its own influence on the frequency of nut falls from oak trees during mast years. Mild winters and cold spring basically means that for the next few months, thousands of acorn are expected to fall from oak trees. This year, flower buds that had formed previously during the mild winter are theorized to flower much more instead of being affected by winter extremities.

Alongside acorns, there are other strains of plants that also have the ability to produce massive amounts of their nuts, including hickory and walnuts. These nuts have similar botanical processes that the oak trees conduct. In a USA Today report, Michigan's Royal Oak arborist Jeremiah Sandler said that they are getting a lot of updates about the excessive acorn drops, but they are tirelessly explaining to concerned citizens how normal this phenomenon is for the oak trees.

Check out more news and information on Plants on Science Times.