After a SpaceX Dragon 2 spacecraft successfully splashed down in the Atlantic Ocean late Thursday night, a loud boom was reported in parts of Florida.

As a result of the landing, some people said their houses shook.

The phenomenon is a sound that corresponds to shock waves and is produced when an item travels faster than the speed of sound through the air. 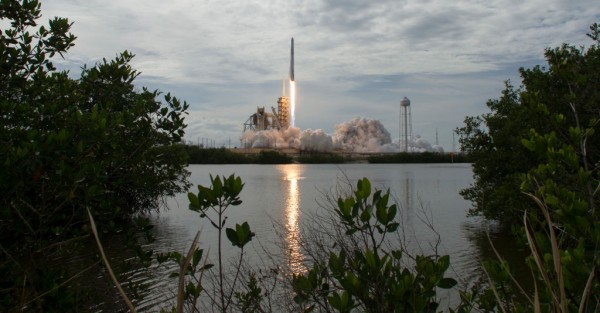 (Photo: Bill Ingalls/NASA via Getty Images)
CAPE CANAVERAL, FL - JUNE 03: In this handout provided by the National Aeronautics and Space Administration (NASA), the SpaceX Falcon 9 rocket, with the Dragon spacecraft onboard, launches from pad 39A at NASA's Kennedy Space Center on June 3, 2017, in Cape Canaveral, Florida. Dragon is carrying almost 6,000 pounds of science research, crew supplies, and hardware to the International Space Station in support of the Expedition 52 and 53 crew members. The unpressurized trunk of the spacecraft also will transport solar panels, tools for Earth observation, and equipment to study neutron stars. This will be the 100th launch and sixth SpaceX launch from this pad. Previous launches include 11 Apollo flights, the launch of the unmanned Skylab in 1973, 82 shuttle flights, and five SpaceX launches.

Newsweek said SpaceX completed its 23rd commercial resupply mission to the International Space Station with the arrival of the Cargo Dragon capsule.

The spacecraft stayed aboard the station for nearly a month before returning to Earth.

NASA and SpaceX launched Dragon 2 atop a SpaceX Falcon 9 rocket on August 29. The US Space Agency said the spacecraft carried scientific experiments and technologies related to botanical plant study on bone health.

Dragon spacecraft often made splashdown landings in the Atlantic Ocean, far away and secluded to increase safety procedures.

According to Space.com, the capsule de-docked from the ISS and flew over the Pacific Ocean at 9:12 a.m. EDT. The capsule fired its engines at 10:07 p.m. EDT to knock itself out of Earth's orbit and start its descent into the atmosphere.

The Dragon traveled east across North America during the following few minutes, leaving a brilliant trail in its wake that could be seen from throughout the Southeastern United States. Earthlings could hear its tremendous sonic boom as it passed across Florida and Georgia. It splashed down into the Atlantic Ocean at 10:57 p.m. EDT, less than an hour after its initial burn.

Action News Jax reporter Dani Bozzini was among those who noticed the spaceship in the sky. She posted about the experience on Twitter.

Derek Galloway, a Twitter user, replied to Bozzini's video. He said that he and his family "heard a huge boom" and felt their entire house shake during the incident. He stated that the Florida shore was at least 45 minutes or an hour distant from his home, suggesting that the sonic boom's range was extensive.

More video of the SpaceX Dragon re-entry over Alabama tonight… from Nikki Ziello. A sonic boom accompanied it. Splashdown has been confirmed; it was the 23rd cargo/resupply mission to the International Space Station. pic.twitter.com/WYnw9932Y3

The spaceship has also been seen in Alabama and other states. On Thursday night, Nikki Ziello obtained footage of the re-entry above the state. James Spann, an AMS certified broadcast meteorologist, confirmed the occurrence and shared Ziello's video.

NASA (via Click Orlando) said the Falcon 9 emits three sonic booms during its descent. To guide the rocket, first the merlin main engines, then the black landing legs, and lastly, the titanium grind findings were employed.