In a Flickr post, Pesquet said astronauts saw a phenomenon when lightning strikes in the upper atmosphere at altitudes higher than usual.

The event is a highly unusual occurrence, according to Pesquet. He added that they have a facility outside Europe's Columbus laboratory dedicated to studying these bursts of light. He went on to say that the Space Station is ideal for this observatory since it passes above the equator, which has more thunderstorms.

The capacity to investigate atmospheric phenomena that we wouldn't be able to examine on Earth is one of the advantages of being on the ISS. These occurrences, which are frequently given fantasy-inspired names like elves and sprites, may influence our environment. 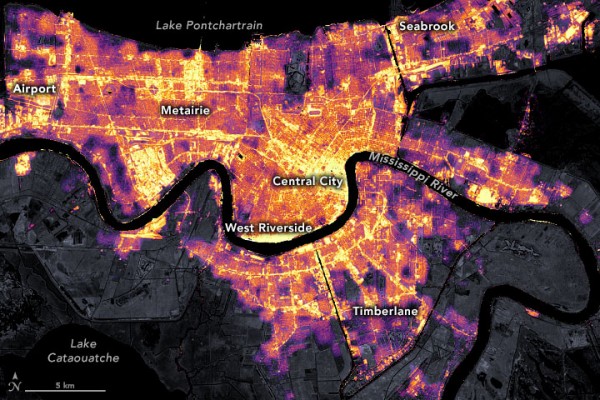 (Photo : NASA Earth Observatory images by Joshua Stevens, using Black Marble data courtesy of Ranjay Shrestha/NASA Goddard Space Flight Center and Landsat data from the U.S. Geological Survey.)
A team of scientists from NASA’s Goddard Space Flight Center and the Universities Space Research Association (USRA) has mapped the outages using satellite data. The images above show nighttime lights data acquired on August 9 and 31 by the Suomi NPP satellite. The base maps make use of data collected by the Landsat 8 satellite.

The astronaut stationed on the International Orbit Station (ISS) has tweeted a snapshot of a rare lightning flash seen from space.

On Twitter, ESA astronaut Thomas Pesquet described the photograph as a "transient brilliant flash." Andreas Morgensen, a fellow ESA astronaut, "captured the first image of them from orbit!" said Pesquet.

According to CNET, the brief bright flash seen in the shot is made by upper-atmospheric lightning.

🌩A single frame from a timelapse over #Europe, showing a transient luminous event in the upper atmosphere! We have a 🇩🇰-led facility monitoring these events thanks in part to @Astro_Andreas who took the first picture of them from space! ⚡ https://t.co/tfFS3KqYmm #MissionAlpha pic.twitter.com/XqBdJ64pBq

The hashtag #MissionAlpha appears after Pesquet's message. According to the ESA, Mission Alpha is Pesquet's second mission. Pesquet, along with three other astronauts, was re-launched to the ISS on April 23, 2021.

Aki Hoshide, Megan MacArthur, and Shane Kimbrough are the three astronauts. Kimbrough had previously served alongside Pesquet on the Proxima, Pesquet's first mission.

The photograph by Pesquet is a single frame from a time-lapse video recorded from the station. The image would be stunning even if it didn't reveal the Earth's curvature and the glittering lights of Europe below. It's taken to the next level by capturing a transitory light event at its peak.

The astronauts onboard the International Orbit Station have been able to snap some amazing photographs from space due to its strategic placement.

Photographs of the aurora borealis taken by British astronaut Tim Peake and American astronaut Scott Kelly in 2016 serve as an example. Kelly took the picture in January of that year (per National Geographic), while Peake took another few months later (per Independent).

Astronauts also obtained images of an airliner flying over the Bahamas (per TMZ) and SpaceX's Crew Dragon spaceship.