Atacama desert surprised experts as a new fossil of a 'flying dragon' was unearthed on the vast region. According to the latest paleontological study, Chile's large desert contained the remains of a dinosaur from the Jurrasic-era deep beneath the rock and sand that accumulated over the years. The new dinosaur discovered was previously known to be a creature exclusively found along with other prehistoric animals in the northern hemisphere.

The flying dinosaur was discovered before as part of the early pterosaur family, which glided above the ancient planet 160 million years ago. The flying dragon's anatomical structure includes pointy wings, beaks, and tails. In addition, its teeth collection points outwards from the mouth, making its appearance unique from other members of pterosaurs.

Flying Dragon in the Atacama Desert 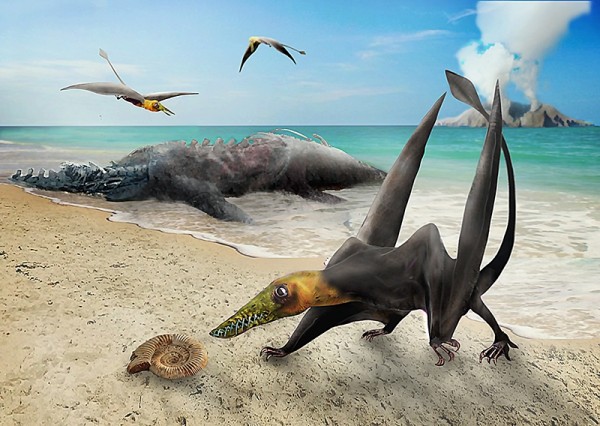 Atacama Desert Museum of Natural History and Culture expert and director Osvvaldo Rojas was the first to discover the fossil of the flying dragon. The study to identify the prehistoric remains was made possible through the collaborative efforts of the Museum and the University of Chile.

University of Chile's expert and lead author of the study Jhonathan Alarcon said in a Newsweek report that the discovery of the flying dragon was not expected in the region where the Atacama desert is located. The expert added that the data from the unearthed dinosaur would help them understand more about the vast distribution of animals in the pterosaur's group that is not defined up to this date. The study will contribute to the clues that would point out dinosaurs' unrecorded migration between the northern and southern hemispheres. In addition, more of the details regarding the link between the landmasses of the planet's southern regions and the supercontinent Gondwana during the prehistoric periods could be uncovered.

Dinosaur Comparable to Largest Pterosaur Rhamphorhynchus; May Give Clue to the Uknown Migration Between Northern and Southern Hemisphere

Alarcon said that the dinosaur's unknown migration between the northern and southern hemispheres could potentially be plotted in the near-established paleontological records, as fossils of the same creatures under the pterosaur group were already unearthed in Cuba. Nevertheless, further research must be met to construct the correct scenario of what happened between the planet's prehistoric North and South continents.

Chile's vast desert of Atacama is currently among the largest areas of the planet that only contains sand and stone. It was theorized that the Atacama desert was part of the larger Pacific Ocean during the early millennia of the planet. Most of the places resting on the desert are believed to contain large volumes of prehistoric evidence. While many fossils have been unearthed from the desert, experts still believe that more clues are buried beneath the endless sand than they expect.

The dinosaur was subbed as the flying dragon due to its excessive wingspan that measures up to 6.5 feet. Alarcon said that the pterosaur was probably a full-grown adult based on its humerus. The fossil was so large that it was comparable to the largest pterosaur member called the Rhamphorhynchus. The study was published in Acta Palaeontologica Polonica, titled "First record of a Late Jurassic rhamphorhynchine pterosaur from Gondwana."

RELATED ARTICLE: Breaking Discovery: How Scientists Have Unearthed a 120 Million-Year-Old Prehistoric Peacock That Lived Alongside Dinosaurs