Tesla revealed its new crash safety system that, like its predecessors, will allow drivers to be protected from dangerous risks on the road. The new technology will be based on an advanced environment reading, where the car will be able to collect real-world data while driving. A large volume of Tesla vehicles that was equipped with specialized sensors along with the company's famous self-driving technology will be the data-collector for the crash safety advancement Tesla is currently working on. 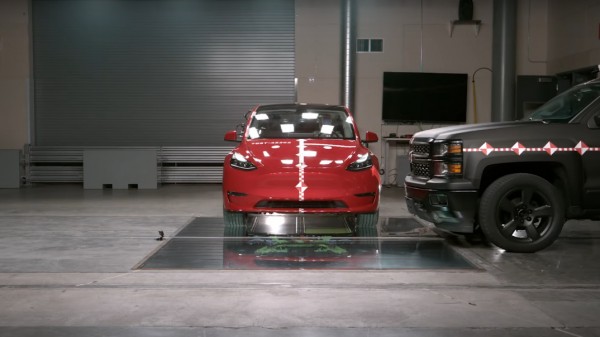 Tesla's new safety technology is expected to be revealed in a detailed approach through video presentations any time soon. One of the initial videos was already presented by Tesla last month, which exhibited the specialized roof for the vehicles called Tesla Glass.

Tesla's latest video, according to Electrek, features the new advancement from the automobile manufacturer. The innovation involves the observation of how effective the new crash safety technology works in a controlled platform. The testing is called the "Tesla Crash Lab - Data Driven Safety."

Tesla was able to present the new crash lab located in Fremont, California back in 2019. The Model 3, one of the latest releases, was tested on the automotive crash testing laboratory and was able to acquire The European New Car Assessment Programme or Euro NCAP's 5-star rating on achieving a "new safety technology benchmark." In addition, the same model also received a 5-star rating from The Australasian New Car Assessment Program or ANCAP.

Dan, a Tesla safety engineer who presented the video, explained the previous problems the crash lab faced. The safety engineer said that the standard crash testing that the automotive industry uses is the best approach to develop the best out of car designs. However, those crash tests are similar to grains of sand on an infinitely complex beach. With that said every crash test is distinct. Dan added that Tesla is currently developing opportunities and merging various approaches in order to attain designs that complement real-world conditions.

The latest video from Tesla's Crash Lab presented what will be the new automotive technology is all about, including its ability to read real-world data in real-time while being active aboard the self-driving sensors.

Tesla has more than 1 million vehicles produced that are currently on the road, each of which is actively gathering data from various parts of the globe. Some of these models, like any other automobile line, are inevitably involved in a car crash incident. The collective data Tesla gathered from their cars allows the new car crash safety technology to read and detect a potential crash in a span of 10 milliseconds. The speed of the technology precisely controls the safety apparatus in the car, including the airbag, to react in a timely manner.

According to the new video, the airbags are specialized to be deployed depending on the current situation and adjustments inside the car. The airbags will react based on the accurate seat and steering position, even if the driver adjusted them based on their preference.

Check out more news and information on Tesla in Science Times.