African Swine Fever Spreads Anew; Reports Describe It as Another Global Pandemic, This Time Among Pigs

African swine fever, another disease outbreak, has bloomed in China. According to reports, its emergence is exactly "far from the eyes" of any surveilling researcher; no one can clearly explain.

A WIRED report specified that the disease is spreading with unbelievable speed, "killing in wide swaths," freezing trade and transport, and resulting in enormous economic disruption.

Hitchhiking on worldwide trips rings the world. There is no treatment, neither vaccine for this disease. Unavoidably, it occurred in the United States in July this year.

It indeed appeared this year. The said outbreak is not COVID-19. Rather, it is a parallel, concealed pandemic, a fatal animal disease first identified in the Dominican Republic in July.

African swine fever postures no risk to humans, although it is not extremely destructive, specifically to livestock. Those deaths reported in China were millions of pigs, at least 25 percent, and probably 50 percent of the whole herd of the largest pork producer in the world. 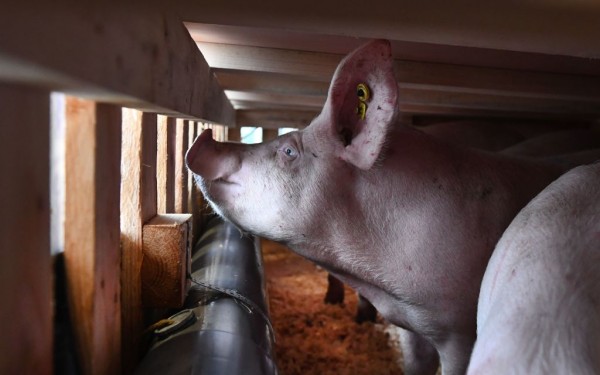 (Photo: FRED TANNEAU/AFP via Getty Images)
One thousand pigs, handpicked for their reproductive performance, flew off on March 10 from Brest to China, a country strongly hit by the African swine fever virus in 2019.

A Disease Equivalent to COVID-19

In a similar report, Verve Times specified that in the United States, animal health authorities are currently on high alert.

Specifically, the US Department of Agriculture has committed an emergency allotment of $500 million to ramp up surveillance, not to mention keep the illness from crossing borders, Reuters reported.

African swine fever is quite feared worldwide that, if it were detected in the US, pork exports, amounting to over $7 billion each year, would shut down right away.

According to epidemiologist and chair of veterinary public health at the University of Sydney Michael Ward, the long-distance transboundary spread of highly infectious and pathogenic illnesses is a worst-case scenario. He added that in agriculture, the disease is "the equivalent of COVID-19."

As with the COVID-19 pandemic at its onset, there is no vaccine that fights against the African swine fever, but also with this current pandemic affecting humans, there is the glimmer of hope for an individual because of basic science that has laid down results for years without getting much attention.

A couple of weeks ago, a multinational research team led by scientists at the Agricultural Research Service of the USDA announced that they had obtained a vaccine candidate based on the virus's weakened version with the deletion of the key gene, and had its efficacy demonstrated in a field test specifically in pigs in Vietnam.

Currently, the vaccine candidate is being developed by a commercial partner, Navetco, a Vietnamese firm, on a timeline that has remained unclear.

This vaccine candidate is the firth experimental treatment developed by the USDA team. The first four are currently being formulated by private firms, minus further federal engagement.

According to microbiologist Douglas Gladue, who is one of the developers of this fifth vaccine, as far as they know, there is this "most advanced African swine fever vaccine" in progress for commercialization.

The Disease That Might Be Resulting in Another Global Pandemic

African swine fever is a longtime foe in the field of agriculture. Even though it devastated the pork industry of China, this country is not the place of origin of the disease. The story behind the African swine fever started in Africa nearly a century ago.

Robert Eustace Montgomery, a Scottish veterinarian who worked for the British colonial government in East Africa, published the first description of the disease in 1921.

He reported that outbreaks of a hemorrhagic illness in farm pigs were very destructive, "an owner needs to be prepared for practically an entire loss.

The new disease resulting from a virus became a regular companion to farming in East Africa. Essentially, wild swine and warthogs are harboring it and occasionally spreading it to livestock, and so do specific species of ticks feeding on swine.

The symptoms of African swine fever were always the same. Specifically, pigs would experience fever, loss of appetites, bleeding under their skin and in their international organs, among others.

Related information about the African swine fever with pandemic potential is shown on CBC News's YouTube video below: