The peak of the Orionid meteor shower and full Hunter's Moon are both visible this week. However, the existence of one has a detrimental impact on the other.

Because Earth's satellite is so large and brilliant in orbit, the night skies will be bleached to the point that few Orionids will be visible. However, if astronomy fans are out full moon gazing, they could strike it well! 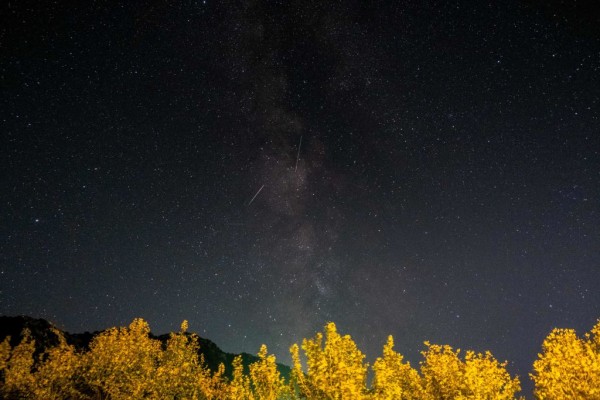 (Photo : IBRAHIM CHALHOUB/AFP via Getty Images)
TOPSHOT - Meteors of the Orionid meteor shower streak as they cross through the milkyway in the mountainous area of Tannourine in northern Lebanon, on October 3, 2021.

NASA said the October full moon would reach its brightest point at 10:57 a.m. EDT on Wednesday. Although the exact time will occur during the day, when most people will not see it, the moon will seem full for around three days, beginning Monday. It means that skywatchers can have a lot of opportunities to take in the view.

According to the site, the full moon is also known as the "hunting moon" since it signals the start of hunting season. It happens around this time of year, when animals begin to bulk up in preparation for the impending winter. Furthermore, as they gather from the newly cleaned-out fields, the hunters could readily spot deer and other animals.

The Dying Grass Moon, Sanguine Moon, and Blood Moon are some of the other names for this full moon, which some believe is due to the leaves changing and vegetation dying, according to NASA.

Peak of the Orionid Meteor Shower

The Orionid meteor shower, which peaks on Thursday (per Old Farmer's Almanac), promises to be another fantastic event this week. NASA said the Orionids are a meteor shower that originates from the well-known Halley's Comet and is regarded as one of the most spectacular meteor showers of the year.

Unfortunately, the strong moonlight will likely obstruct the view because the Orionid peak occurs near the full moon. However, Orionid meteors are running from October 2 to November 7 each year. Hence, skywatchers may see them "at any moment during October," EarthSky said. The trick is to see the heavens from a dark place with a "moonlight-free" sky.

According to NASA, sky gazers may see the Orionids in both the Northern and Southern Hemispheres. Finding a place away from city lights and carrying a lawn chair or blanket so they may lie down are some suggestions for people who want to see them this year.

The space agency suggests lying flat on the back with feet facing southeast if the stargazer is located in the Northern Hemisphere or northeast in the Southern Hemisphere.

It's crucial to take time and allow the eyes to adapt to the darkness. After around 30 minutes, the eyes will start to glimpse meteors.

If it seems to emanate from the radiant point, the constellation Orion, skywatchers will know they've seen an Orionid meteor. The meteors will be seen "throughout the night sky," NASA stated, so they won't have to stare solely at the constellation.