Two of the solar system's outer planet members Uranus and Neptune had been a topic for numerous studies regarding their mysterious composition. The massive planets are dubbed as the 'ice giants' of the planetary group, but along with their low temperature and icy components, the facts gathered from both orbs are a bit fuzzy.

Pieces of information are only confirmed from the giants, and among the previous observations made by astronomy experts, the couple has an active magnetic field that covers them. However, magnetic fields are unusual in many cosmic bodies, but to their massive size, Uranus and Neptune might have a secret in materializing their own. 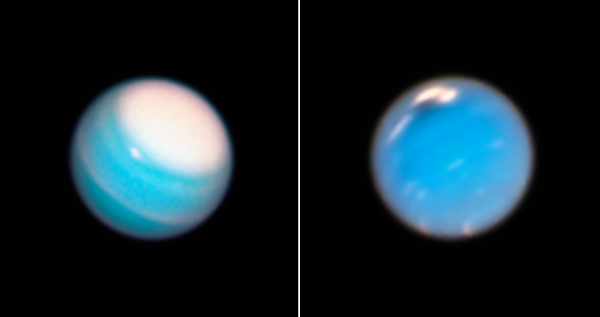 Hot ice layers are the most plausible reason for the potential factors that help Uranus and Neptune generate their magnetic field. According to a new study, the almost impossible existence of hot ice on the two planets can conduct electricity, which may have been the foundation to trigger magnetic fields around the ice giants.

Carnegie Institution of Washington and the University of Chicago conducted a collaborative study to identify the critical details we may have never seen before from Uranus and Neptune to generate their very own magnetic fields.

The study based some of its information on the basics of water chemistry. The liquid water on Earth comprises two hydrogen atoms and a lone oxygen atom. When the collective water body or H2O is exposed to a different condition, the molecules that make its structure could also change. Hydrogen bonding and transition occur from boiling water to freezing ice sheets. Due to its versatility, water's chemical form could jump between 18 distinct variants.

In Uranus and Neptune, the waters are set under the extremities of the planet's pressure and temperature, and this causes the liquid to transform into superionic ice, which has an electric conductivity that is comparable to metallic materials.

ALSO READ: Superionic Ice: The Hottest Ice to Be Invented By Scientists

The superionic hot ice is recreated by the authors to understand what new properties could emerge on the subject. According to Universe Today, University of Chicago, expert Vitali Prakpenka led to producing the model, which was made through spectroscopic observations of the ice under 1.5 million increase of pressure than Earth's standard measures and was set with 11,200 degrees Fahrenheit.

A high-energy synchrotron x-ray beam emitted by the Advanced Photon Source was utilized to fire up the model while it is compressed between two diamond materials. The laser beam shot through the model was 30 times smaller than a single thread of human hair, measuring 3 micrometers. The examination required a sophisticated setup which led the authors to simulate the process a thousand times over a decade.

The results from their studies show that the magnetic fields present in Uranus and Neptune are formed in its thin layers that are made up of fluid and have small depth measures. The known conductivity expressed by the superionic ice is confirmed to work in these shallow fluid layers. One of two successful models the experts have produced is theorized to exist under the determined magnetic field zones, which also causes the latter to be maintained on both planets. The study was published in the journal Nature Physics, titled "Structure and properties of two superionic ice phases."

RELATED ARTICLE: When, Where Is The Best Time And Location For Orionids Meteor Shower Best Viewing Experience?

Check out more news and information Space in Science Times.