In 2019, a UFO aficionado posted about "storming" Area 51, a restricted military base on Facebook, and for him, it was a joke.

However, according to a Space.com report, for federal and state law enforcement, the FB post was something that should be taken very seriously. In response, it prepared a lethal force to stop eventgoers from breaking the off-limits area.

For decades now, the remote location of the base, as well as its restricted access, have driven speculation about military officials carrying out secret investigations on extraterrestrials there, not to mention storing evidence of visiting aliens and UFOs. 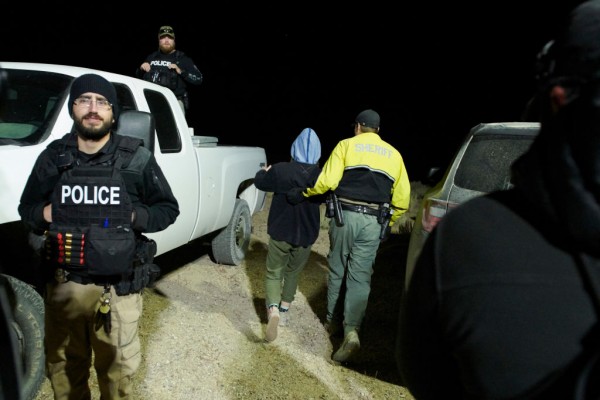 (Photo: BRIDGET BENNETT/AFP via Getty Images)
An attendee is detained after briefly crossing a security line as people gathered to 'storm' Area 51 at an entrance to the military facility near Rachel, Nevada, on September 20, 2019.

The general is prohibited from visiting Area 51. However, in summer 2019, an event on Facebook dubbed "Storm Area 51, They Can't Stop All of Us," which is now deleted, lured almost two million people to register for and join a raid on the base supposedly taking place on September 20.

As specified in the government communications that Rolling Stone recently obtained, this extensive scale of the proposed event raised alarms at federal and local levels.

In response, dozens of law enforcement agencies organized and prepared for the proposed onslaught, including automated lethal force countermeasures.

Meanwhile, A Live Science report said, according to the social media post, the plan for Storm Area 51 was for those attending the event to gather in the Nevada desert close to Area 51, "charge the gates" at sunrise.

Then, once they're inside, attendees intended to "see the aliens" and possibly perform an extraterrestrial rescue operation as the FB post specified and previously reported.

In September 2019, BBC reported that hen 20-year-old college student Matty Robers from Bakersfield, California was the one who created the post in June, claiming it was entirely "a joke from the get-go."

However, law enforcement agencies were not pleased with the report and took the FB post seriously instead of preparing accordingly.

According to the Nevada Department Plan of Public Safety Investigation Division's operational plan for the military base event, a certain portion of the attendees may be armed "and could expect armed conflict.".

The 2019 document was acquired by Property of the People, nonpartisan government transparency, shared with Rolling Stone.

Also specified in the plan was, even if most of the attendees were not seriously planning to raid the off-limits site of the military base, there is a possibility for both foreign and terrorist groups to use this event as a test for the sensitive national security sites' security by infiltrating those people planning to enter the facility.

Additionally, harsh conditions in the Nevada desert, lack of water, and extreme temperature changes could make an already volatile condition worse, seeding panic and increasing the probability of casualties among the masses.

In conclusion, online clamor for raiding Area 51 weakened, and Roberts had the "Storm Area 51" event canceled with only nine days left then.

As an alternative, he encouraged people to visit "Alienstock" instead. It's a UFO-celebrating festival held in Las Vegas. Nevertheless, a few thousand people still gathered in Rachel, Nevada, approximately a 20-minute drive from the entrance of Area 51, on the scheduled event date.

Report about 'Storm Area 51' is shown on Elixir's YouTube video below: