There have been several planets discovered orbiting other stars. Still, scientists have found a new exoplanet that is one of the youngest ever detected. Researchers gave 2M0437b as the name of the newly formed planet.

A multinational team of scientists led by academics, students, and alumni of the University of Hawaii at Manoa discovered this discovery. Researchers published their study, titled "Zodiacal Exoplanets in Time (ZEIT) XII: A Directly-Imaged Planetary-Mass Companion to a Young Taurus M Dwarf Star" in the Monthly Notices of the Royal Astronomical Society. 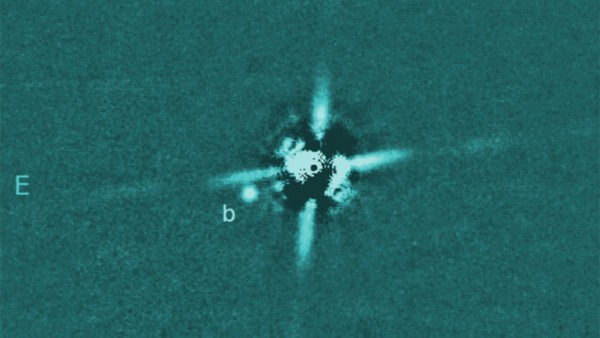 (Photo : University of Hawaii)
Discovery image of planet, which lies about 100 times the Earth-Sun distance from its parent star.

Several researchers found young planets before. However, they rarely detect a young exoplanet with such ease of observation. According to CBS News, a team led by the University of Hawaii that 2M0437b is just a few million years old. The newborn planet is still emitting lava-like heat after its birth.

They discovered the exoplanet with the help of the Subaru Telescope on Maunakea in Hawai'i and later by the adjacent W. M. Keck Observatory. Even with the planet's great distance from its star and massive size, it took three years of observations to confirm the planet's existence and picture it.

The planet 2M0437b and its parent star are located in the Taurus Cloud, a well-known "nursery" for planets. However, because 2M0437b has a much wider orbit than others in its solar system - it's nearly 100 times farther away from its sun than Earth is - it was difficult to observe without new adaptive optics technology.

ALSO READ: NASA Hubble Space Telescope Witnesses Death of a Star; Is This a Warning Sign?

Digital Trends said Planet 2M0437b orbits its star at a distance of roughly 100 times that of Earth and the sun, and has a mass many times that of Jupiter. It happened in a blink of an eye in cosmic timescales. It is so young that the energy released during its development is still heating it up.

Lead author Eric Gaidos, a professor at the University of Hawai'i Mānoa, said in a statement that this fortuitous finding adds to an exclusive list of planets that astronomers can directly view with their telescopes.

Gaidos and researchers can infer something about the exoplanet's composition, as well as where and how it originated in a long-vanished ring of gas and dust around its host star, by examining the planet's light.

The planet's finding is particularly exciting for astronomers. According to them, the exoplanet is easily visible and young. Hence, they plan to study it for many years and learn more about how planets, including Earth, mature.

Future observations may give further insight into the genesis of planets, Endgadget said. It might not take much longer to find out further information. The scientists thought that the soon-to-be-launched James Webb Space Telescope would aid in the detection of atmospheric gases and newly formed moons. 2M0437b may be essential now, but it may become much more so in the future.

RELATED ARTICLE: Exoplanet 95 Light-Years From Earth Lost Its Atmosphere in a 'Giant Impact' 200,000 Years Ago