NASA's Hubble Space Telescope has photographed two dancing galaxies. The galaxies that are colliding are more than 200 million light-years away from Earth.

Aside from that, Hubble Space Telescope recorded some other fascinating sights, like the death of a star and a starburst galaxy. 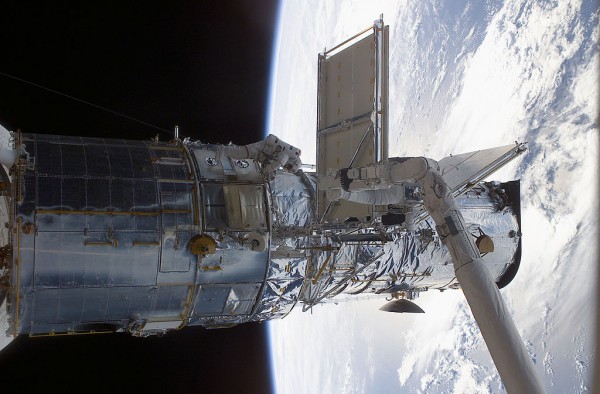 (Photo : Getty Images)
Astronaut John M. Grunsfeld (C) works to replace the starboard solar array on the Hubble Space Telescope (HST) March 4, 2002 during an extravehicular activity (EVA) in space. Grunsfeld and the rest of his Space Shuttle Columbia crew are in space to try and upgrade some components of the Hubble Space Telescope. (Photo courtesy NASA/Getty Images)

In this #HubbleFriday image, we see how immense gravitational attraction is causing these galaxies to interact: https://t.co/lqmhYfsnzY pic.twitter.com/9ZmMTA4YCF

In the image, NGC 5953 is tugging on NGC 5954 and appears to be extending one spiral arm downward. The interaction is caused by the tremendous gravitational pull of these galaxies. Furthermore, most astronomers think that spiral galaxies colliding leads to the development of an elliptical galaxy.

However, NASA noted that large collisions take hundreds of millions of years to occur, and the interacting galaxies' appearance would not alter much.

According to another NASA blog post, NASA's Hubble Space Telescope discovered the galaxy pair Arp 86. The reported pair of interacting galaxies is around 200 million light-years away from Earth, near Pegasus's constellation. The Arp 86 is made up of two galaxies - NGC 7752 and NGC 7753 - a piece of comprehensive information explained.

NGC 7753 is a massive spiral galaxy that dwarfs its smaller counterpart NGC 7752. The NGC 7752 appears to be practically related to the NGC 7753, which is why it was given the designation Arp 86, which denotes that the two galaxies appear in astronomer Halton Arp's Atlas of Peculiar Galaxies, which researchers published in 1966. The space agency uploaded the photo on Twitter, too.

This #HubbleFriday image shows a pair of galaxies locked in a cosmic dance.

Eventually, the gravitational pull between them will result in the smaller galaxy being tossed out into space or engulfed by its larger neighbor.

NASA's Hubble Space Telescope has also studied Arp 86 to understand better the relationship between nascent stars and the frigid gas clouds they develop. It also spotted star clusters, gas clouds, and dust in a range of settings distributed across adjacent galaxies in connection to this.

When combined with the Atacama Large Millimeter or Submillimeter Array (ALMA), NASA Hubble's observations might provide significant information for scientists researching the star's birth. According to NASA, ALMA is a massive radio telescope that is positioned high in the Chilean Andes.

In a previous Science Times article, the NASA Hubble space telescope documented the death of a star during a supernova explosion, and astronomers speculated that this discovery might experts use as an early warning system to spot a dying star.