The spiral galaxy NGC 2903 is featured in this jewel-bright Picture of the Week. Hubble Space Telescope's Advanced Camera for Surveys (ACS) and Wide Field Camera 3 (WFC3), which NASA deployed in 2002 and 2009, respectively, took this image. Hubble had already spotted this galaxy in 2001 when neither the ACS nor the WFC3 deployed.

European Space Agency said Hubble Space Telescope captured a more finely defined NGC 2903 in the 2021 image than in the 2001 image due to the more excellent resolution. The ACS and WFC2 together cover a wide spectrum of ultraviolet, optical, and infrared wavelengths. Therefore, the 2021 picture has better wavelength coverage than its predecessor from 20 years ago. The Wide Field Planetary Camera 2 (WFPC2), Hubble's workhorse instrument from 1993 until 2009, when the WFC3 superseded it, captured the image in 2001. 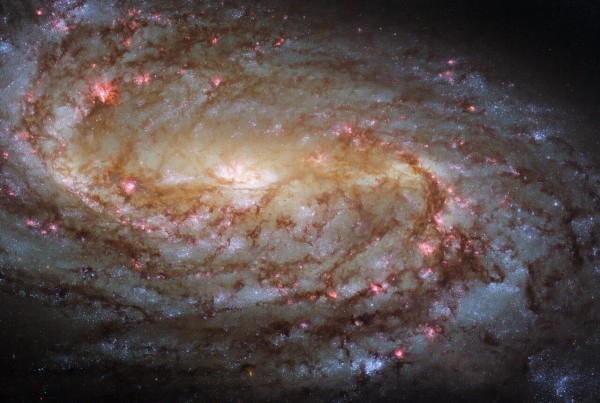 Hubble Space Telescope has a long and intriguing history of crewed servicing missions. NASA carried out to fix flaws in Hubble's mirror, upgrade Hubble's technological systems, and replace obsolete sensors with new ones. Hubble's amazing lifetime is one of its most impressive qualities, which would not have been achievable without the outstanding success of the servicing missions. Comparing NGC 2903 photos from 2001 and 2021 - both extraordinary photographs for their time - emphasizes the need for a steady, accessible station in space that can gather data reliably not just year after year, but decade after decade.

Meanwhile, NDTV said NASA just released a strikingly colorful image of a region in space where young stars are forming. It's splashed with crimson and yellow colors, with dazzling stars sprinkling the landscape like diamonds and glistening when the sun's rays travel through them. This colorful star-forming zone resembles a seasonal cosmic brew, according to the American space agency. According to NASA, the region's warm tone comes from gas and dust particles flashing brightly in "this stellar nursery." NASA's Hubble Space Telescope took the image.

According to NASA, this region is comparable to the Orion Nebula, one of the most well-known star-forming regions, although it is further away from Earth. Its distance from Earth is believed to be around 13,000 light-years. The nearest star-forming zone to Earth is the Orion Nebula, which is 1,500 light-years distant. It is visible to the naked eye.

RELATED ARTICLE: NASA Hubble Space Telescope Witnesses Death of a Star; Is This a Warning Sign?