Pareidolia is a psychological phenomenon where individuals could see imaginative figures such as faces and objects in a random abstract. New imaging from the Spitzer Space Telescope has been released, and it would surely challenge the artistic impression of anyone who will see it. Based on numerous feedback, the cosmic image looks similar to the figure of the famous sci-fi legend and kaiju superstar Godzilla.

Pareidolia works on any surface, and in terms of astronomical studies, many names of stellar clusters and cosmic objects were based on how their physical structure looks like. On the red planet, Mars was a face and the other terrain resembles the shape of the mysterious Bigfoot. In Mercury, Han Solo's figure appears. The constellation even forms the figures based on ancient Greek mythology.

Godzilla Among the Stars 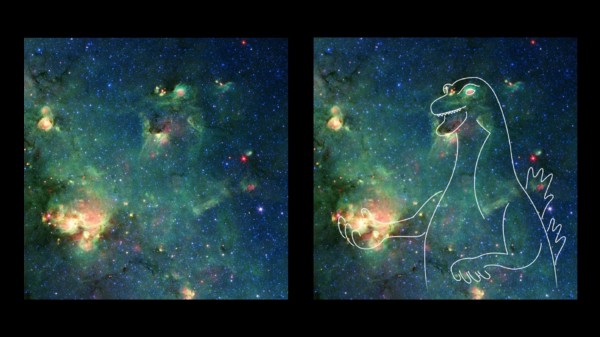 Now that the month is reaching Samhain, there is one monster that appeared among the specks of dust and thick clouds. The Halloween monster captured was Godzilla, spotted by the powerful Spitzer Space Telescope. The monster was actually formed throughout a nebula formation which was previously captured by the Spitzer. Caltech astronomy expert Robert Hurt was the one responsible for processing the images taken by the telescope, and it is by chance that they noticed the pareidolia of Gozilla.

Hertz said that their focus is to define the images captured by Spitzer, and emphasized that they were not looking for any signs of any galactical monsters. According to a Universe Today report, Hertz was just browsing one part of the sky when they noticed the figure. The monster's shape was then accentuated when they cropped a specific part of the image. It was then that the expert perceived what appears to be a roaring Godzilla.

The Spitzer Space Telescope was among the most powerful visualizer of space back in its time. The telescope's job ended back in 2020, but many of its captures are still stored by NASA, and among those photographs appeared the monster-like figure. Spitzer uses a technology that is linked to infrared technology to analyze images that are challenging to capture through simple optic lenses. Among the materials that it could examine and lighten up are the complex nebula formations. Nebulas are made of clouds and dust which are too cold for light to irradiate. Spitzer was specialized to target these types of bodies, and throughout its projects, the telescope did not fail to harvest images for many astronomical studies.

NASA's JPL Caltech report said that the monster was charted in a nebula that exists in the constellation called Sagittarius, and was relatively near the Milky Way galaxy. Spitzer came across the monster-like figure as part of the Galactic Legacy Infrared Mid-Plane Survey Extraordinaire or GLIMPSE Survey. Godzilla's right hand is known to be the forming star W33 located at 7,800 lightyears away from our planet, while its eyes and snout contain an uncharted region in our galaxy.

RELATED ARTICLE: NASA Requests to Maximize Efficiency and Sustainability of SLS, Offers Private Development Half the Price To Clone Rockets