A new study suggests that successful golf players learn to play the sport in a reversed stance, wherein they would switch hands when holding the club. 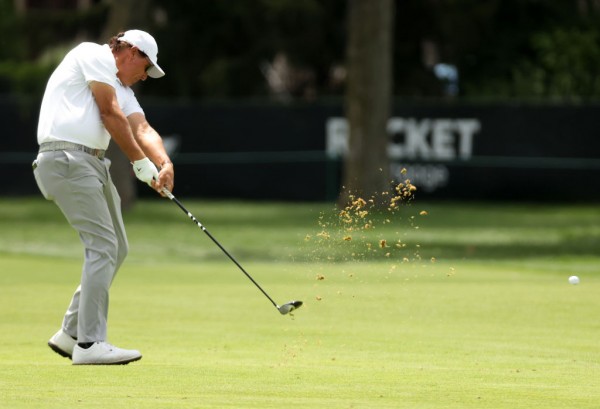 (Photo: Getty Images)
DETROIT, MICHIGAN - JULY 02: Phil Mickelson plays his second shot on the fourth hole during the second round of the Rocket Mortgage Classic on July 02, 2021, at the Detroit Golf Club in Detroit, Michigan. (Photo by Gregory Shamus/Getty Images)

Does Having A Reversed Stance Help a Player Hit the Ball Further?

The study, titled "Laterality and Performance: Are Golfers Learning to Play Backwards?" published in the Journal of Sports Sciences, discusses how players like Mickelson have learned to use reverse stance technique in playing golf.

Daily Mail reported that the research team led by Dr. Oliver Runswick, a lecturer in performance psychology at King's College London, suggests that adopting the reversed state may help players hit the ball further and with greater accuracy.

For instance, Mickelson is a known right-handed golfer but uses his left hand to swing the club. Other than him, Dr. Runswick and his team have also identified three others who practice the technique.

Their success in playing the opposite stance has intrigued Dr. Runswick. The team recruited 150 golfers of varying abilities for their study and divided them into five groups, with 30 golfers in each.

They found that professional golfers adopt a reversed stance compared to non-professional players. When asked why they chose this technique, most of them answered that it increased accuracy and distance.

Dr. Runswick believes that learner golfers should initially pick up and hit the ball at a traditional grip before deciding to switch to their opposite hand as it may be beneficial in the long run.

According to the magazine GOLF, the concept of right-handed players swinging left is a new one. Terry Rowles, who is ranked as GOLF Top 100 Teacher, dismisses the idea of right-and-wrong swing. Instead, he believes that golf swings should be based on the unique bodies of each player.

Aside from Mickelson demonstrating his reversed stance, Rowles said that he is not convinced with the idea that right-handers should swing left or vice versa. He noted that a right-hander who swings to the left could create issues in playing as it will be harder to release the club because the stronger right arm becomes the lead arm.

He cited American golfer Spieth who also plays left-handed with baseball and right-handed in golf. "Jordan Spieth is the other way around...they tend to hold their angle [between their wrists and arms] for longer as their stronger lead arm is pulling the club down," he told the magazine.

He explained that it leaves the clubface more open and can cause the club too steep when the stronger lead arm prevents the clubhead from releasing. More so, this technique can be the cause of golf swing's chicken wing, a term used to describe the appearance of the lead arm bending the elbow and cup the lead wrist through impact.

Rowles emphasized that a reversed stance is not the best solution to improve hitting, especially for those who are only learning to play golf. He said that he would not even personally try it.

RELATED ARTICLE: The Physics of Throwing a Football

Check out more news and information on Physics & Math in Science Times.